"I caught a piranha! Which river is this, anyway? I'm glad I didn't take a dip!"

"I caught a piranha! He'd better not catch me!"

"I caught a piranha! Sure hope it was the only one!"

In the museum, the piranha appears in the bottom right tank (Animal Crossing), middle tank (Wild World), or the right tank (City Folk), where it will bash against the walls of the tank in an attempt to reach the player, although this depiction of piranha is inaccurate. In New Horizons, the piranha is in the first room in a large tank, and will charge the tank as well as sometimes follow the player.

"Dear me! My mind boggles! I had no inkling that we had such frightfully dangerous fish in these waters! I suppose that would indicate they're not as lethal as they are made out to be... Or are they trying to lull us? Have no fear! We'll look after your sharp-toothed friend. For everyone's sake!"

"Piranha are rather bony. I can't say I've heard good things about their flavor. Some restaurants do serve them, of course, but as a tourist attraction, eh wot? These things probably sit about discussing OUR flavor, you know."

"Most people see piranhas as savage fish that enjoy tearing prey apart with their teeth... However, they're actually quite timid, wot wot? They're often treated like bad guys due to their scary faces. I hope we haven't hurt their feelings..."

"They have terrifyingly sharp teeth, which contributes to their ferocious reputation. Oddly enough, they are actually quite timid, though they are still very dangerous fish. If they can't find food, they will resort to cannibalism or tear apart any animal they can grab hold of. Take care when catching them so they don't end up biting your hand with their sharp teeth!"

"I am not exactly a fan of the piranha...despite knowing that they're mostly harmless. But those nasty, pointy teeth... Hoo. These infamous little blighters will attack when in groups. Imagine all of those hundreds of tiny teeth! To think that they're floundering about our peaceful waters, just waiting to strike. Well, never fear--I shall keep THIS one under the strictest lock and key, with nary a bathroom break allowed!"

During a Fishing Tourney, when given a piranha, Chip will say the following dialogue.

"Get this! Piranha are actually pretty darn tasty! But do NOT eat them live! That bite'll bite you! Nyuuuk nyuk nyuk nyuk!"

"So get this: piranhas are pretty darn tasty. But they're NOT actually that mean and vicious! ...It's just a sad reputation they got somewhere along the line. But me? I'm pretty vicious! Bottoms up!" 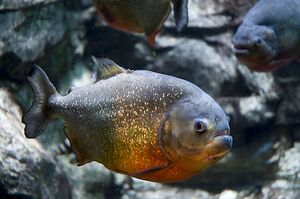 The red-bellied piranha has a reputation one of the most ferocious fish, but this is a widespread myth perpetuated by the media. In reality, they are scavengers that are easily scared. Live-feedings for captive piranha are also unhealthy for them, which again, is falsified in the media. They can be aggressive, but only when they are deprived of food. Red-bellied piranhas can be found in the Amazon River. They grow to about 33 cm and weigh 3 1/2 kilograms.