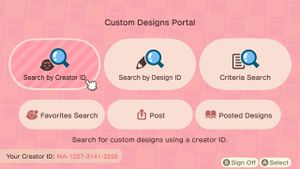 New Horizons is backwards compatible with QR codes created for these previous titles via the NookLink service of the Nintendo Switch Online app for iOS and Android (Face-cutout standees can only be imported after an update following the release of the 1.9.0 Free Update). The app can scan valid QR codes, saving up to one design at a time and overwriting any previously scanned design. The player must then select the Download function of the Custom Designs NookPhone app to import the design from the app into the game itself. Imported designs retain the formats used in New Leaf, which have different appearances and dimensions to the changed formats used in New Horizons. Importing a Horned hat pro design from New Leaf is the only way to obtain this style of headwear in New Horizons. Although Happy Home Paradise introduces the ability to apply custom designs directly to a character when remodelling their home, designs that were imported from a Nintendo 3DS title cannot be used.

After befriending Sable in New Horizons, she will give the player several different categories of textures that can be used when customizing furniture. These categories of patterns can be accessed from a workbench when customizing furniture items that have fabrics. With the Ver. 2.0 update, these patterns can be worn as clothing or applied to walls and floors inside the player's house, similar to how regular designs can be used. Additionally, Happy Home Paradise adds one new category to these designs: Variety.