A letter is a way to communicate in the Animal Crossing series. Players have the ability to write, send and receive letters from villagers and other players.

Once the letter has been written, the player is then given a complete view of the letter to allow for proofreading. Once accepted, the letter then appears in the mail section of the player's inventory. From there, it can be re-addressed, deleted, re-written or have a gift attached to it. All items except fish, bugs and turnips can be sent as a gift.

Pete, the Post Office, and purchasable stationery do not appear in New Horizons; instead, Orville allows the player to get a letter from the airport card stand and immediately send it to a chosen recipient without first storing it in the player's inventory. The delivery fee is 200 Bells. The card stand letters have varying designs much like the stationery of previous games, and some are cycled in and out per season; these display the date after which the design will no longer be available. The player is limited to sending a maximum of 100 letters to villagers and 40 to other human residents in a single day, after which Orville mentions that he is getting overwhelmed, and he will not accept any more until the following day.

Available recipients include the following:

If a letter containing significant spelling and grammar errors is sent to a villager, this may result in a complaint by the villager. 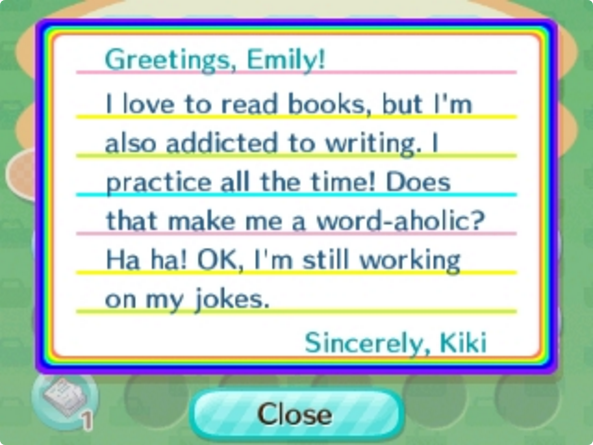 A letter by Kiki

Letters are always replied to by villagers. Letters can be received from all manner of animals, some as a result of special events. Here is a list of characters that send letters to the player:

Letters have a present attached only if one is sent to the recipient.

Depending on how many lines players write a neighbor, they can give them different items in return. For example, if players give them a piece of fruit and write them a one line long letter, they will give the player a piece of fruit back. This can be any type of fruit.