The Happy Home Showcase is a plaza that appears in Animal Crossing: New Leaf, allowing players to meet and visit other players' homes after connecting through the StreetPass feature of the Nintendo 3DS. This feature is not available when the system has parental controls on—Digby blocks the player if they try to enter. 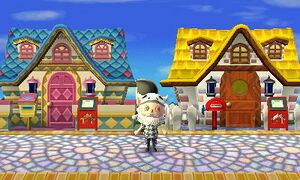 The player can also order items from the house that they are visiting, though special items cannot be bought, such as refurbished items or items that cannot usually be ordered from the catalog. Only 5 items from each house can be ordered at a time, per day,[1] and they have a 20% markup, rounded down. Players can also see the badges that other players have earned from Phineas for activities.[2]

Players received via StreetPass sometimes hold items that will be given to the player after they have been StreetPassed a certain amount of times. The colors of the items are random.

North American and European players could receive special homes belonging to members of the game's staff as well as other Nintendo employees through SpotPass.[3]