Boondox is a town located to the north of the player's town[1] in Animal Crossing: Wild World. The name Boondox comes from the word boondocks, which means an uncivilized, poor area. Pelly or Phyllis will first inform the player of the town when they first ask to make a donation. Both pelicans cry when telling a player of Boondox. According to them, Boondoxians just eat grilled cheese, but since there is no cheese or bread, they are forced to eat fried dirt, "without ketchup!" However, this may just be an exaggeration, as one of the letters sent to the player claims that Boondoxians usually eat day-old croissants.

After a certain Bell amount is donated, one of the pelicans will tell the player that the Boondoxians are making a well for mud baths. Also one small Boondoxian called Tiny Tommy Hicks will finally be able to have a proper 5th Birthday with frothy mud drinks after some more Bells have been donated.

At certain donation landmarks, the Boondoxians will send a player a letter informing them how their donations are being used to better Boondox. Also enclosed in certain letters will be a feather. Donating Bells to Boondox is the only way of obtaining the feathers, and they cannot be bought from Tom Nook's catalog. However, if one has obtained these items and moved their character to Animal Crossing: City Folk, one will be able to order them again for under 1,000 Bells.

"I heard that Boondox has changed its name to Boondopolis. As you can see, <player>, your donations have been put to good use!"
— Pelly, when the player donates a total of 3,200,000 Bells or more.
"I get the feeling that it's no longer necessary, but it IS my job, so... I will continue to send your donations to Boondox... I mean, "Boondopolis." You know, they're doing so well that they really should be sending donations to US."
— Pelly, when the player's donations exceed 6,400,000 Bells.

Boondox will eventually change its name to Boondopolis after the player donates a total of 3,200,000 Bells, becoming a booming metropolis from the players' donations. After this, the players can still continue to donate in order to receive the final feather, the rainbow feather. Despite being a thriving city, the Boondoxians still like to eat mud.

Whether Boondox actually exists is never determined. A cranky villager may claim that Tortimer walked past and muttered "I'm having steak tonight!" or that Tortimer's installing a plasma TV at his house after the villager made a donation. These villagers are highly skeptical, asserting, "a coincidence? I think not!'" 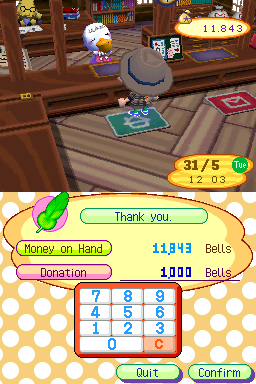 Prompt for donating to Boondox

Tiny Tommy Hicks is a resident from Boondox that Pelly or Phyllis will tell the player about when they donate a certain amount of Bells to Boondox. He does not appear in the game. He seems to be a reference to Tiny Tim Cratchitt, a character from Charles Dickens novel A Christmas Carol, as well as hick, a term used to refer to an unsophisticated, boorish person. In the novel, Tiny Tim is a small boy around the age of five, who has to use a crutch. He and his family live in poverty and can barely make "ends meet." At the end of the story, he is lifted out of debt by a changed Ebenezer Scrooge, who donates a large sum of money to the Cratchitt family.

This page could be improved with the addition of images.
You can help by uploading one or more images and including them on this page.
Retrieved from "https://nookipedia.com/w/index.php?title=Boondox&oldid=1056454"
Categories:
Hidden category: