In the Animal Crossing series, there are places that are mentioned by villagers or other characters, but cannot be seen or visited by the player. 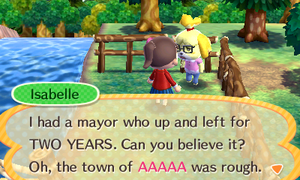 Isabelle mentions the town of AAAAA.

AAAAA is a town referenced by Isabelle in Animal Crossing: Happy Home Designer. Isabelle has been the assistant for several town mayors but has had to take over their jobs when the mayors inexplicably leave. The mayor of AAAAA left for two years, which gave Isabelle more trouble than usual.

AAAAA is meant to be humorous commentary on how players may stop playing Animal Crossing games for extended periods of time, effectively abandoning their towns while their town ecosystems continue to live on without them. A hypothetical player who would name their town "AAAAA" is someone who did not put much care into naming their town something meaningful, as they simply pressed the same keyboard key multiple times in a row during the town naming process. This indicates that they do not take the gameplay very seriously, and thus they do not care about taking care of their town.

In a similar vein, Rover's North American trophy description in Super Smash Bros. 4 and amiibo figure description mention a hypothetical town named "AAAAAAA," the potential result of players who might choose to input a nonsensical name, not realizing that the name cannot be changed later. The PAL trophy description adds an extra "A," for eight A's instead of seven. 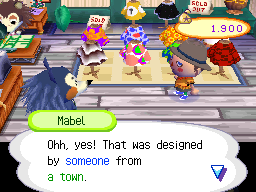 Mabel describing a design coming from a town.

a town is an unseen town in the European version of Animal Crossing: Wild World from where all default designs of Able Sisters come from.

Anyisle is an island referenced by Mabel in Animal Crossing: New Horizons. Similar to Treehut and Anytown, the default designs in Able Sisters are made by someone from Anyisle. 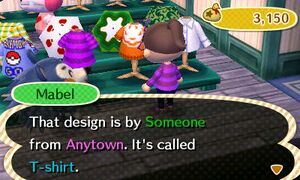 The T-shirt design by Someone from Anytown.

Boondox is a poor town located to the north of the player's town in Animal Crossing: Wild World. The player can donate Bells to Boondox from town hall, and the Boondoxians will send the player feathers as a reward. After 3,200,000 Bells are donated, the town will turn into Boondopolis, a booming metropolis.

Lake University is a university mentioned in the final letter received from Boondox, after 6,400,000 Bells have been donated.

The Delivery Center is an unseen location in all games that is referenced after the player purchases an item from the Nook Shopping catalog. After making a purchase from the catalog, the player is told that the Delivery Center will send out the item(s) purchased which will then be shipped to their house. 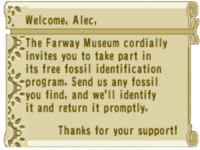 The letter sent to the player from the Farway Museum.

Glimmering Goddess Beauty Boutique is a location that is referenced by Serena in Animal Crossing: City Folk. A series of dialogue appears after the player throws their Axe into the fountain, and Serena may say that she got her eyelashes curled at the Glimmering Goddess Beauty Boutique. After mentioning it, she may give the player a Silver or Golden Axe. This location is most likely similar to Shampoodle.

In Animal Crossing, snooty campers, in an effort to avoid getting themselves dirty, will ask the player to carry them up a mountain named after the player's town.

In Animal Crossing: City Folk, Myrtle's Macho Mole Spa is a location referenced by Don Resetti during a conversation in the Reset Surveillance Center. During a random conversation when only Don is present, he may mention that Sonny Resetti is getting a massage and therefore is the reason why he is not present in his chair. Don is not sure if Myrtle's Macho Mole Spa is the right name of the place Resetti is getting a massage at. He says it is "Somethin' like that." However, this is the only time the spa is referenced, so this is most likely the correct name.

The Object Delivery Center (オブジェ配達センター) is an unseen location in Doubutsu no Mori e+. It is a shop that delivers made-to-order objects. It is run by Redd. The service was accessed on Nintendo's website and had a small flash game where the player haggled with Redd. The player would then input additional information about their town and receive a password to tell Tom Nook. The service was shut down in 2019. 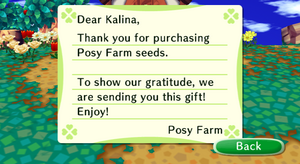 A letter sent to the player, noting that the seeds came from Posy Farm.

Posy Farm is an unseen farm that supplies Tom Nook's store with flower seeds. In Animal Crossing: City Folk, after the player purchases 50 flower seeds from Tom Nook's store, they will receive a letter from Posy Farm. It will thank the player for purchasing Posy Farm seeds and will have a Silver Watering Can attached to it. Snooty villagers talk about receiving a thank you letter from a flower seed supplier. This is most likely a reference to Posy Farm and the letter the player receives with a silver can attached.

Sumware is an unseen location in Animal Crossing: City Folk. The name Sumware is an intentional misspelling of "Somewhere," to make it appear to be a real place. Mabel claims it is where Wendell lives, after moving from Tuskany.

Tony's Dancing Clown Coffee is a café mentioned by snooty villagers in Animal Crossing: New Leaf when they are talking about gimmicks in cafés. While they are discussing the topic, Brewster mentions offering brunch, causing the villager to get upset. As a result, Brewster cancels the plan to offer brunch. 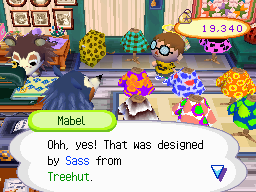 Treehut is an unseen town in Animal Crossing: Wild World and Animal Crossing: City Folk. When the player first goes to Able Sisters, all the designs that are initially displayed are created by people that reside in Treehut. Sometimes villagers, usually when talking about clothes, mention Treehut or an inhabitant of Treehut, usually mentioning how ahead of style Treehut is.

Treehut is named after Nintendo Treehouse, Nintendo of America's localization team, and the authors for the default designs are members of the team.