(Redirected from Watering Can) 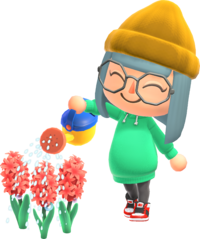 Artwork of a player with a watering can from Animal Crossing: New Horizons

The watering can is a gardening tool, first introduced in Animal Crossing: Wild World and appearing in all subsequent games. It is used to water flowers in order to prevent them from wilting and dying, and can restore wilting plants to full bloom.

A watering can can be used to water the ground in the spot directly below the player. Watering flowers will prevent them from wilting or dying, and restore wilted plants the very next day. Watering the ground or any other item will simply have no effect. Watering flowers can promote the growth of new flowers through hybridization. In New Leaf, flowers that have been watered will show droplets of water falling to the ground, and will sparkle throughout the day to indicate that they do not need further watering.

The watering can is crucial to gaining and maintaining a perfect town environment, as it keeps flowers thriving. With the Beautiful Town ordinance in New Leaf, the watering can is made redundant as flowers will never wilt and have increased chances of producing hybrid flowers. 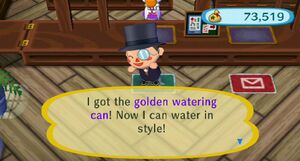 More advanced versions of the watering can that have unique effects can be obtained, though their effects differ between the games. In City Folk, the silver can is able to revive red turnips that are wilting, and can increase the chances of growing hybrid flowers and money trees. In all appearances, reviving wilting black roses with the golden can will turn them into golden roses. In New Leaf both watering cans have increased range from the standard variant.

New Leaf changes the effects of the silver can and golden can, which are now more efficient as they can water multiple flowers at once.