This page is about the handheld item. For the balloons that hang in the air with presents, see Balloon. 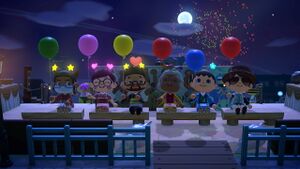 Balloons are a handheld item that the player can hold and can also be placed as furniture. If the player trips while running, is stung by wasps, or falls in a pitfall (except in New Horizons) while holding a balloon, they will lose that balloon. Variants of balloons include Bunny Balloons and Heart Balloons.

In Animal Crossing, balloons are given out by Redd at the lake during the Fireworks Festival on July 4. Tom Nook will also give the player a free balloon in his store during a One Day Sale. In Doubutsu no Mori e+, Tom Nook sells balloons during One Day Sales in addition to the free one. Balloons can be held or placed as furniture, but they cannot be dropped, only "let go" which releases them into the sky. There are five colors of balloons and three colors of bunny balloons:

Artwork of Phineas with a bunny balloon

In City Folk, balloons are obtained free of charge from Phineas in the city. The player can choose between balloons and bunny balloons, but the color is random. Bunny balloons cannot break when the player trips or is shot at with a Slingshot by another player.[citation needed] There are eight colors of balloons: blue, cyan, green, indigo, orange, pink, red, and yellow. 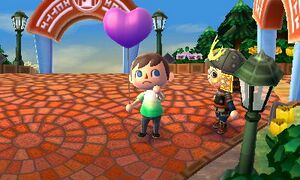 Holding a balloon in New Leaf

In New Horizons, five of the balloons can be obtained as a prize from Redd's Raffle for

500 Bells, or found in Nook's Cranny outside of August for

600 Bells. The Nook Inc. Balloon can only be obtained from NookLink. Unlike in previous games, there are no bunny balloons.