This article is about the location in City Folk. For the K.K. Slider song, see "Animal City."

The city is a location in Animal Crossing: City Folk that can be visited by riding the bus from town. Only a central plaza area can be explored in City Folk, housing merchants and services, a theater, and with access to the Resetti Surveillance Center. Random villagers from out of town, possibly inhabitants of the city, can be seen wandering the plaza and browsing the shops. The villagers that can be seen in the plaza will change every time a building is entered and exited by the player. Precipitation in the city affects the town, even if the weather is different there. For example, flowers in the town will be hydrated by rain in the city, and gyroids can be found buried underground the next day.

Similar shopping districts would appear in later games. Animal Crossing: New Leaf features a Main Street just north of the village, while the 2.0 update of Animal Crossing: New Horizons added an open market to Harv's Island, both of which share similar purposes to the city.

Cranky villagers will sometimes ask the player if they were brought up in the city, and it is implied in Mom's letters that the player moved from the suburbs of a city. 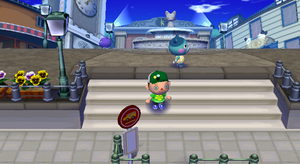 The City Square during the day.

The city in Animal Crossing: City Folk is accessible by bus from the town, which is free of charge and available at all hours. The city's central square contains a bus stop and shops, such as an auction house, Shampoodle, and GracieGrace, as well as the headquarters of the Happy Room Academy. Characters such as Crazy Redd, Katrina, and Dr. Shrunk all have their own venues in the city, and they no longer visit the player's town. There is also an Automatic Bell Dispenser on the left side of the square, below the Marquee theater, which functions exactly the same as the one in the town hall. The Resetti Surveillance Center can be accessed through the tunnel on the far right of the city, but only when the cones have been moved. A large fountain stands in the center of the square, similar to the one that can be built from donating to the town fund, but with a unique statue depicting Serena. 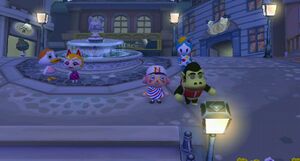 The City Square at night.

A skunk named Kicks can occasionally be found outside the dilapidated building during dry weather, and will shine the player's shoes for 500 Bells. On sunny days, a fur seal named Phineas will occasionally appear next to the fountain and give the player unique items such as pinwheels and balloons. Up to five villagers may roam the square, though fewer will appear at night, all of which who do not live in the player's town. The villagers seen in the square will change every time a building is entered and exited by the player.

A black market owned by Redd is situated on the left edge of the square, and entry is by invitation only. The player can be invited to the store by villagers, other players, or even Redd himself via mail. A one-time entrance fee of 3000 Bells must be paid in order to enter. Redd's store sells rare items and paintings, which are sometimes forgeries. Their authenticity can be determined by Blathers or Tom Nook.

The Marquee is the city's theater, where players can watch comedy routines performed by Dr. Shrunk, and on rare occasions by Frillard. The player can learn up to four emotions, with the emotion learned being based on the routine that is performed.

The Happy Room Academy (HRA) have their headquarters in the city. The office is managed by Lyle, who can inform players of their HRA scores, unsubscribe players from the mailing list, and explain about the organization. A model room is displayed at the back of the building, and high-scoring player rooms that fit the monthly theme will be presented here.

GracieGrace is a high-end boutique that sells high-priced furniture, clothes and accessories. The store's inventory is seasonal, and clearance sales are held near the end of each season. Labelle is the shop's clerk, but occasionally the owner, Gracie will appear to offer fashion critiques.

The auction house is a building run by Lloid, the Gyroid, and is open 24 hours a day. Here, items can be displayed and bid on by players and their friends via Nintendo Wi-Fi Connection. The player can also access their storage from the auction house's checkroom. As the online service has been discontinued, this building is now of very limited use.

Shampoodle is the city's salon, where Harriet can change the player's hair style or give the player a Mii mask. Each services costs 3,000 Bells.

Katrina runs a Fortune Shop, where the player can have their fortune read to determine their luck for the day. Katrina can also provide charms once a month, which require certain conditions to be met that can usually only fulfilled by visiting players. Fulfilling the conditions will confer a special benefit on the player.

In New Leaf and New Horizons[edit]

The city is part of the stage Town and City in Super Smash Bros. for Wii U. 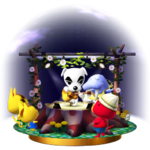 Town and City returns as a stage in Super Smash Bros. Ultimate.