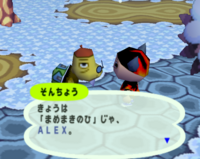 In Doubutsu no Mori+, Tortimer can be found near the shrine between 10 AM and 6 PM on Bean Day. If spoken to, he will give the player a bean-throwing set.

In Japanese towns in Animal Crossing: City Folk, Tortimer appears outside town hall on Bean Day. If spoken to, he will give the player either a blue ogre mask or a red ogre mask. Due to the discontinuation of the Nintendo Wi-Fi Connection in 2014, this event, along its two items, can only be obtained in the Japanese version of the game. 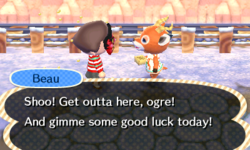 In Animal Crossing: New Leaf, the player will find Isabelle in the event plaza. When spoken to, she will explain to them about the holiday and give them either a blue ogre mask or a red ogre mask; the player is able to choose only one. If the player talks to villagers while wearing one of the ogre masks, they will perform a shocked emotion and start throwing beans at the player, referring to the Japanese tradition of throwing beans at Oni to bring good luck. If the player is holding beans while wearing one of the ogre masks, villagers will remark to the player about an ogre wanting to throw beans.

The bean-tossing kit, part of the Nook Shopping seasonal event in New Horizons

While initially absent in Animal Crossing: New Horizons, Bean Day (now referred to its Japanese name of Setsubun) was added in the 1.7.0 Free Update and is celebrated in two occasions. The first is a Nook Shopping seasonal event, where from January 25 to February 3, the player can purchase the bean-tossing kit. The second is a Able Sisters event, where from February 1 to February 3, the player can purchase a horned-ogre mask, ogre costume, and a okame mask.

This page could be improved with the addition of images.
You can help by uploading one or more images and including them on this page.
Further details: Needs screenshots from City Folk.

This page could be improved with the addition of images.
You can help by uploading one or more images and including them on this page.
Further details: Needs screenshots from City Folk.
Retrieved from "https://nookipedia.com/w/index.php?title=Bean_Day&oldid=1048542"
Categories:
Hidden category: