In Dòngwù Sēnlín, the Fireworks Festival, including Redd's stall, was moved from summer to the Chinese New Year on six consecutive nights, beginning on the eve of the New Year. Each night it lasts from 11 PM to 1 AM. The New Year's wishing ceremony taking place at the Shrine on January 1 in other games was also moved to the morning of the Chinese New Year.

In Korean towns in Animal Crossing: City Folk, Tortimer appears outside town hall on the Lunar New Year and will give the player a Yut if spoken to. After the discontinuation of the Nintendo Wi-Fi Connection in 2014, the Yut can only be obtained in the Korean version of the game.

Isabelle greeting the player and giving a Yut Board in New Leaf.

In Korean towns in Animal Crossing: New Leaf, a cutout appears in the event plaza on the Lunar New Year, and Isabelle also appears in the plaza from 6 AM to 12 AM. If spoken to, she will give the player a Yut Board. 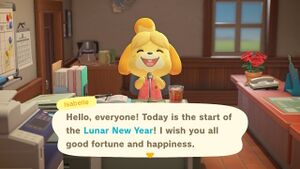 Beginning in the 1.7.0 Free Update, three Nook Shopping seasonal event items can be purchased to coincide with the Lunar New Year from February 10 to 17. These items include the Lucky Red Envelope, Lunar New Year Decoration, and Bokjumeoni Lucky Pouch.