Not to be confused with Frank.

"I understand it's Turkey Day, but you wouldn't believe the way they choose to celebrate it in some places. But the less said there, the better."
— Franklin, Animal Crossing: New Horizons

Franklin is a pink turkey. His eyelids and beak are lavender. His big round half-closed eyes have large and thick magenta linings, white rims, grayish-purple irises, and large blue pupils. His magenta snood is also his nose. His neck's feathers are magenta. His wings for arms and tail's feathers are both dark-purple and light-purple with white tips. His legs are pink talons with dark-brown stripes.

In Animal Crossing and City Folk, Franklin is too fearful, hiding from villagers to save himself from being the Harvest Festival/Turkey Day's 'main course', but he is kind to the player enough, wanting the player to bring him pieces of silverware from the banquet and pilfer the utensils, so to prevent him from being served. For each piece of silverware brought to him, he then gratefully rewards the player with one piece of the Harvest Series.

In New Leaf and New Horizons, Franklin instead happily hosts the Harvest Festival/Turkey Day with no fear. During the event, he asks the player to find ingredients that allow him to cook dishes, and then gratefully hands out unique rewards upon doing so.

Artwork of Franklin from Animal Crossing.

Franklin makes his debut in international versions of Animal Crossing. Tortimer, the mayor, invites him for dinner and intends for him to be the main course. During this time, Franklin hides behind obstacles such as trees, buildings and signs, and waits for the player to bring him pieces of silverware from the banquet. Franklin believes that if the player pilfers the utensils, the villagers will be unable to serve him. For each piece brought to him, the player receives one piece of the Harvest Series.

If the player talks to the villagers during the Harvest Festival, they talk about where they've seen Franklin. The player can also get a map coordinate clue each time they speak to a villager. While in one hiding place, Franklin will accept only one knife and fork set, so if players wish to give him another, they must move from the hiding place until Franklin disappears and search for him again.

However, there is a glitch that allows the player to visit Franklin in the same hiding place multiple times. After talking to Franklin, the player must enter any building within the acre Franklin is found in, including houses, the museum, or Tom Nook's store. When the player returns, Franklin will remain in the same spot. In Doubutsu no Mori e+, however, this glitch is removed.

Artwork of Franklin from City Folk.

Artwork of Franklin from New Leaf.

In Animal Crossing: New Leaf, Franklin acts as a chef, rather than the 'main course' of the Harvest Festival. He asks the player to find ingredients that allow him to cook dishes, and hands out unique rewards upon doing so. Some of these ingredients must be obtained from villagers by completing tasks, while others, such as fish, have to be caught. There is also one secret ingredient for each dish that is required in order to receive all the unique items, and the villagers may tell the player what this is. Unlike previous games, Franklin does not hand out furniture from the Harvest Series, although he hands out the fruit basket and the cornucopia; the fruit basket can be obtained when getting the first secret ingredient correct, while the Cornucopia is obtained after the player makes all of the dishes. 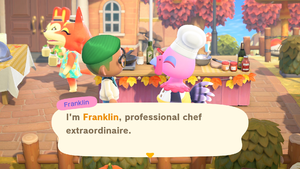 Franklin introducing himself to the player in New Horizons.

While initially absent from Animal Crossing: New Horizons, Franklin was added alongside Turkey Day in the Free Winter Update. He returns as the host of the event.[1] Franklin's voice pitch is changed once again in New Horizons, being similar to that of smug villagers.

Franklin's poster can be obtained from Nook Shopping after inviting him to Photopia via his amiibo card.

Prior to its removal in version 2.0, when the player scans Franklin's amiibo card and tries to invite him, he will say:

Hello, Franklin here. Oh! Is that Player? What's up, gobble gob?
A trip to your campsite?! Hm! I'd love to take some time to kick back and stretch my wings out there...
But a chef's work is never over!
I've got hungry customers to feed, so I'm stuck here for now.
But I appreciate the invite! Next time I see you, I'll be there cooking up more delicious dishes.

Franklin appears as a Miiverse stamp in Animal Crossing Plaza.

Franklin was added to Animal Crossing: Pocket Camp on October 28, 2021, he appears for a seasonal garden event around Harvest Festival.

Franklin appears as a trophy in Super Smash Bros. for Nintendo 3DS.

Eat or be eaten. 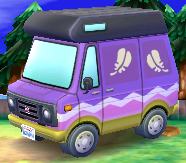 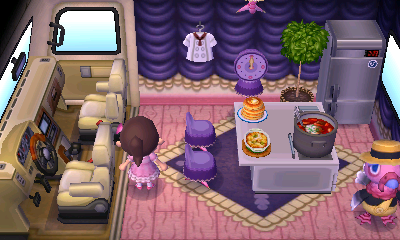 Eat or be eaten. 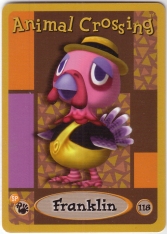 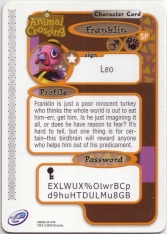 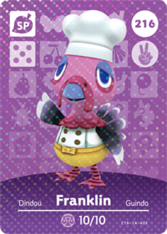