"The Acorn Legend is back! It is I, Cornimer, and the season of ME has come again! EH HEH HEH HOORF!"
— Cornimer, Animal Crossing: New Horizons

Cornimer is identical in appearance to Tortimer, but his head is replaced with an acorn head that has a happy toothy expression carved into it. 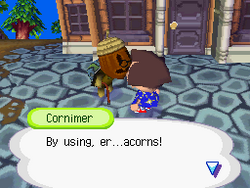 Cornimer talking to the player in Wild World.

It is heavily implied that Cornimer is Tortimer in disguise. In addition to their similar appearance and names, during the Acorn Festival, Tortimer is not behind the desk in the town hall. Additinally, the first time Cornimer laughs in his dialogue toward the player, he says, "Hef horf horf... Wait no! Good luck lil' Oakie!", with "hef horf horf" being Tortimer's laugh.

The roving machine that is whacked by players during the Hammer Time tour appears to be Cornimer's head on top of a lawnmower.

Cornimer himself returns in the Welcome amiibo update for Animal Crossing: New Leaf, where he appears as the final boss in the story mode of Animal Crossing: Puzzle League. The character is once again strongly implied to be Tortimer in disguise, as Cornimer wears the same red aloha shirt and uses similar language to Tortimer. Unlike previous stages, there is only a single round versus Cornimer but the difficulty is significantly raised. After being defeated he will initially throw a tantrum, but then acknowledge the player's victory and congratulate them.

Although initially absent in Animal Crossing: New Horizons, Cornimer was added in version 2.0. Cornimer will appear in place of Tortimer on Harv's Island during the fall season. If the player talks to him once each day, he will ask to give them acorns. If they say yes, he will give them a random amount of acorns. Afterward, he works the same as Tortimer, letting the player access their storage.

In Super Smash Bros. Brawl, Cornimer appears as an obtainable sticker. He is also mentioned in Tortimer's trophy description.

This page could be improved with the addition of images.
You can help by uploading one or more images and including them on this page.
Retrieved from "https://nookipedia.com/w/index.php?title=Cornimer&oldid=1067027"
Categories:
Hidden categories: