This article is about Mr. Resetti. For Resetti's older brother, see Don Resetti.

"Lightning does all the work, but thunder takes all the glory."
— Mr. Resetti, Animal Crossing: New Horizons

Mr. Resetti makes his debut in Doubutsu no Mori and its enhanced port, Animal Crossing. When the player first resets, Resetti will thank the player for buying the game and introducing himself. On subsequent resets, he appears when the console is reset or the game is turned off without saving, appearing outside the player's house to give a lecture on why saving is important. If the player continues to reset, it will lead to him forcing the player through absurdist tactics, such as repeating a phrase or creating a fake reset. His brother Don may also appear in his place after the player resets at least seven times.

On the player's sixth reset, when repeating a phrase for Resetti, if the player types certain phrases, Resetti will have a unique reaction and scold the player, saying, "You think I wasn't gonna read what you wrote there? You oughta be ashamed of yourself!" The phrases are as follows: 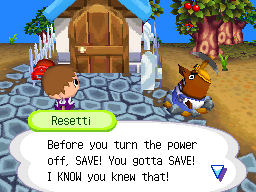 In the Welcome amiibo update, his amiibo figure can be scanned to make his RV appear in the campground. 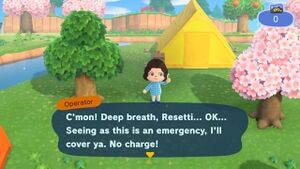 Though normally unnamed, the operator of the Rescue Service is revealed to be Mr. Resetti.

Resetti's Poster can be obtained from Nook Shopping after inviting him to Photopia via his amiibo, and beginning in version 1.7.0, the Resetti Model can be purchased from Nook Shopping from January 25 to February 2. Additionally, Mr. Resetti appears on the "Ongoing - Little Bro" variation of the Construction Sign item, and network lost error screen while player visit other player's island.

He appears again when Yū and Alfonso dig up fossils and Yū accidentally hits him with his shovel. He scolds them and says his tunnels are starting to cave in from their digging. 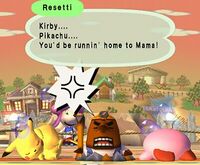 Mr. Resetti appears as an Assist Trophy in Super Smash Bros. Brawl, where he will give the players a long lecture. His dialogue box obstructs either the top or bottom half of the screen. Mr. Resetti will also respond to stage events, such as characters falling asleep or getting knocked out. Attacking him for a while makes him angry and causes an explosion. He also appears as two trophies and one sticker. 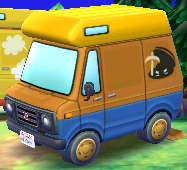 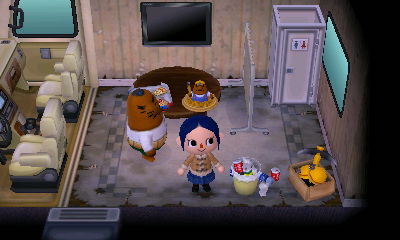 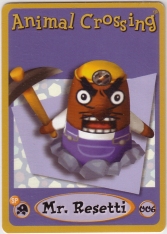 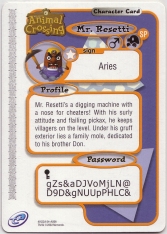 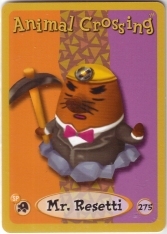 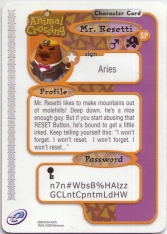 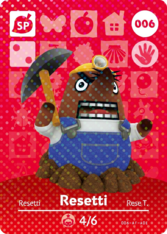 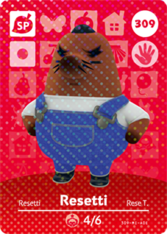 Mr. Resetti on other wikis