For the villager whose Japanese name is Leila, see Flo.

Leila is a young turtle[nb 1] in Animal Crossing: New Leaf who appears on Tortimer Island. She is the daughter of Kapp'n and Leilani, and the granddaughter of Grams. Reflecting her young age, she often substitutes L's and R's with W's when speaking.

Leila is a green turtle/kappa with a bald spot surrounded by brown hair tied in a pair of short ponytails, a big yellow muzzle, a red inner mouth, and pink cheeks, being the youngest in her family. Like her father, Kapp'n, and grandmother, Grams, she has closed eyes with white round rims. She wears a pair of yellow flower hairpins on her ponytails, and a pink sleeveless dress with white flower patterns with pinkish-red linings.

Like her family, Leila speaks with a stereotypical pirate-like accent. 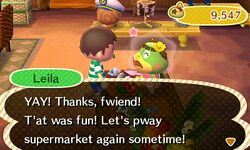 Leila after the player sells her an item in Animal Crossing: New Leaf.

In Animal Crossing: New Leaf, Leila appears on Tortimer Island and, if spoken to, will ask the player to play "supermarket." The player can sell items obtained on the island to Leila for 5% of their full value. In the Welcome amiibo update, Leila's Pic can be obtained from Wisp if her amiibo is scanned.

Leila was added to Animal Crossing: New Horizons upon the release of the 2.0 update on November 4, 2021. In this game, she can appear at the Roost as a visitor. She can also appear with Kapp'n's family if any of their amiibo cards are used. Additionally, Leila's Poster can be obtained from Nook Shopping after inviting her to Photopia via her amiibo.

In Super Smash Bros. for Nintendo 3DS, Leila appears as a trophy and has a chance of appearing in the background of the Tortimer Island stage.

In Animal Crossing: Happy Home Designer, Leila will share a house with Kapp'n, Leilani, and Grams.

The pirate kid doesn't fall far from the pirate tree. 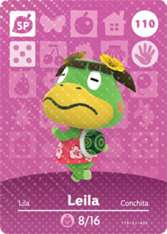