C.J. is a beaver in the Animal Crossing series who debuted in Animal Crossing: New Horizons. He is the son of Chip, and replaces him as the host of the Fishing Tourney, a fish-catching event held throughout the year. He is also a regular visitor to the island.

C.J. and Flick appear to work together, with C.J. referring to him as his partner, mentioning that they live together, and implying he commissions him to create the fish models for the player.

Like his father Chip, C.J. is a beaver, having the same appearance as Chip, but also with a few differences: his inner-ears are light-blue, while his eyes, which are bigger than Chip, have blue irises and dark-blue pupils. He also has a yellow tuft of hair sticking out on top of his forehead.

Like his father Chip, C.J. loves hosting Fishing Tourneys. He is also shown to have a background in streaming and internet presence, as he will challenge the player to catch three fish of a certain size, claiming it is to "keep the fans happy." When visiting the player's island, he mentions that his "old man" showed him the ropes of fishing but never was able to do it. 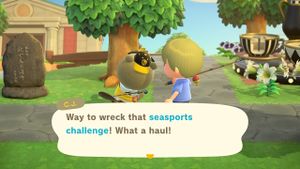 C.J. after the player completes his seasports challenge in New Horizons.

In Animal Crossing: New Horizons, when C.J. appears on the player's island, he will challenge them by either catching three small fish, big fish or five fish of any kind. Once the challenge is complete, the player can sell fish to him for 1.5x the sell price at Nook's Cranny. He can also have his roommate and business partner Flick make fish models for free if the player gives him three of the same fish, and he will mail the model the following day.

C.J. also hosts the Fishing Tourney in January, April, July, and October. His dialogue during this time has puns related to the ocean or fishing. 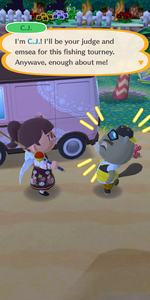 C.J. introducing himself in Pocket Camp.

C.J. was added to Animal Crossing: Pocket Camp in November 2020, and has since replaced Chip as the host of the Fishing Tourneys. He functions similarly to Chip, by accepting tourney-related fish and adding it to a total size counter, and by providing the player challenges for them to complete for prizes. 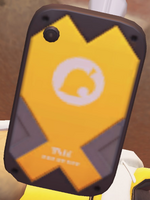 A night cruise is a good way to catch night fish. 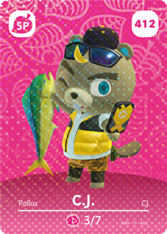