This article is about the special character. For the villager whose Spanish name is Luna, see Cherry. For French, see Shari.

"My role is to ferry travelers between dreams, allowing one such as you to tour the islands of distant strangers. Once within the dream of another, it will be as though you have actually set foot on their island. Sounds fascinating, does it not?"
— Luna, Animal Crossing: New Horizons

Luna is a tapir introduced in Animal Crossing: New Leaf who allows the player to visit other towns via dreams. Her name comes from the relation between night's sleep and the moon; similarly, her Japanese name contains "yume," the Japanese word for "dream."

Luna is a blackish-brown tapir with blonde hair tied in a bun, three white flower decorations with blue gems at their centers on her bun, ears with white tops, pink eyeshadow, blue "freckles" below her half-closed eyes, and red lipstick. She wears a white dress with pink linings, and red heels.

Luna talks like a snooty villager and likes dreaming. 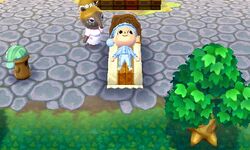 Luna standing next to the player after they enter a dream in Animal Crossing: New Leaf.

In Animal Crossing: New Leaf, Luna works in the Dream Suite. She allows the player to visit a previously visited town or any town found via SpotPass. In the world of dreams, the player can do anything they like, but any changes will not be saved and items cannot be brought back to the real world.

Luna standing next to the player after they enter a dream in Animal Crossing: New Horizons.

While initially absent from Animal Crossing: New Horizons, Luna, along with dreams, was added in the 1.4.0 Free Summer Update Wave 2.

The Dream Suite building does not exist in New Horizons and Luna never appears while the player is awake, unlike in New Leaf. Instead, the player can access Luna's services by sleeping in any bed within their home; beds placed outside and in other villagers' homes do not work. They also cannot be accessed on another player's island, or while the airport gate is open. Her services work the same as they do in New Leaf. When the player uploads their dream, Luna will mail them a Dream Bell Exchange Ticket the next day, which can be sold at Nook's Cranny for 5,000 Bells. She will send them another for each subsequent update made to the dream.

Prior to its removal in version 2.0, when the player scans Luna's amiibo card and tries to invite her, she will say:

Hello, this is Luna. Ah! It is you, Player. How may I help you?
A campsite, you say? To decompress and dream beneath a canopy of stars sounds wonderful... but no, I cannot.
There are many sweet dreams to compile and many travelers in need of a guide. Another time, perhaps.

Luna appears as a trophy in Super Smash Bros. for Nintendo 3DS.

Dreams are but a reflection of your unconscious self.

Dreams are but a reflection of your unconscious self. 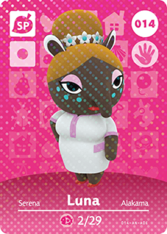