"The good, the bad, the so-so... Make all of it work for you."
— Lyle, Animal Crossing: Happy Home Designer, Welcome amiibo, and New Horizons

Lyle is a blue otter with large whiskers and a hunched appearance, though he is sometimes mistaken for a weasel. He wears black thick-rimmed glasses.

Lyle, as he appears in Wild World.

Lyle makes his first appearance in Animal Crossing: Wild World working as an insurance salesman. He appears every Saturday between 6 AM and 6 PM outside the player's house to take a survey. He will follow the player for a time if they do not talk to him immediately, a sign of his persistent nature. Upon talking to him, he will ask a number of unanswerable questions, heckling the player into signing a health insurance policy. The only way to avoid this is either by declining to take the quiz or by not having sufficient funds (which will "bust his chops").

By paying 3,000 Bells, the player will receive 100 Bells every time they are injured - this includes tripping or getting stung by bees. However, players can receive the 100 Bells bonus only once per day. A further payment of 6,000 Bells on the following Saturday will result in the players' receiving compensation of 100 Bells if they buy a counterfeit painting, but only if the painting is presented to Lyle himself.

Normal villagers sometimes warn of a health insurance scam operating in the area, which is a reference to Lyle and his scamming techniques. Some jock villagers also say the same thing - how this "guy" came and asked them if they wanted their muscles insured. At first they said no, because "whoever's heard of insuring your muscles?" and that another villager told them it was a scam.

Lyle is also believed to be working with Redd, scamming people out of money. In his questionnaire, Lyle asks for what weekday Redd should appear in the town, after which Redd will appear on that day, but will also deny any connection with him.

If the player speaks to Blathers on the fourth Sunday of May, he tells them how Lyle tried to sell his insurance to him in the museum. The villagers will also constantly mention how Blathers seems flustered and not his usual self.

"Well... Sadly, we've noticed an increasing number of... undesirables as well. Yes. In fact, just the other day we had a rather odd guest darken our door. 'Twas a Saturday, and yet this fellow wore a very hot-looking business suit. Yes, Yes, he was rather relentless with his queries, as well... He even went so far as to ask me some personal questions, eh wot? If I'm to be honest, I must admit I tired of these questions quickly. Yes... In the end, the cheeky chap asked if I had insurance and if I wanted to sign up! Why, that tore it! I lost my temper and threw the lout out! The nerve... This is a museum, I said! Why couldn't he glean that fact and be gone?!" - Blathers Animal Crossing: Wild World

Lyle, as he appears in City Folk.

Lyle appears to have a more respectable job in Animal Crossing: City Folk working in the Happy Room Academy Headquarters in the city. He will mention how much he hates his new job, and frequently talks of his old, "high-flying" lifestyle. He seems to be calmer, possibly to fit in with his new "happy" job and only makes a reference to "bustin' [his] chops" once, if the player refuses to join the HRA. When talked to, his persistent nature leads him to continue talking with the player until they agree to join the Happy Room Academy. If the player's house becomes the model room, he states (if they decide to discuss the model room with him, not the evaluation) that he is trying to love his new job. An ad for the HRA, with his picture on it, can be seen in the bus on the back of Kapp'n's seat.

He makes no reference to his past lifestyle in Animal Crossing: Wild World other than his frequent complaints and mentions of his old office when the player first talks to him. He does not talk about Redd or Crazy Redd's, which is located nearby, implying that he was caught for fraud, and has to work for the HRA, which explains why he does not enjoy his work.

At the Happy Room Academy Headquarters, the player can also speak with Lyle in order to find out their current "HRA evaluation" or stop the weekly flow of evaluation letters.

It is suggested that Lyle used to be a grave-digger or fossil hunter, because if the player's house becomes the model room and has a particularly valuable fossil in it, Lyle will say that he used to dig up bones in "the yard... not the backyard, the other yard...", implying that it was a graveyard he used to dig in.

Lyle, as he appears in New Leaf.

Lyle returns in Animal Crossing: New Leaf. He appears in Nook's Homes after certain conditions have been met and runs the Happy Home Academy, the successor of the Happy Room Academy seen in previous titles. His office is in the bottom left of the store, where a seating area was previously. Similar to Animal Crossing: City Folk, Lyle gives the player their HHA evaluation. However, he no longer presents model rooms, a job now done by Digby. Because his office is so easy to access, evaluation letters are no longer an option.

While initially absent from Animal Crossing: New Horizons, Lyle makes his return in the 2.0 update, where he can be invited to The Roost or Harv's Island via his amiibo, the latter of which will also allow the player to obtain Lyle's Poster from Nook Shopping. When summoned at The Roost, he will also bring Lottie, Tom Nook, and Digby.

In Animal Crossing: Happy Home Designer, Lyle appears on the second floor of Nook's Homes, as a senior designer. Lyle will give the player tips for designing when spoken to, but he seems forgetful, as Lyle constantly asks the player if he has already told them about the tip provided, and appears quite pleased if it's not the case. 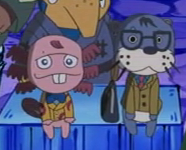 Lyle and Dr. Shrunk in Gekijōban Doubutsu no Mori.

Lyle makes a cameo in 🎬 Gekijōban Doubutsu no Mori, sitting next to Dr. Shrunk in the audience at the Fireworks Festival.

In Super Smash Bros. Brawl, Lyle has a chance of appearing as a spectator in the Smashville stage. He also appears as a collectible sticker.

In Super Smash Bros. for Wii U, Lyle once again has a chance of appearing as a spectator in the Smashville and Town and City stages. He also appears as a collectible trophy. 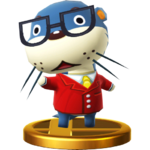 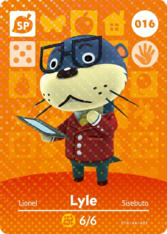