This article is about the special character. For the normal dog villager, see Daisy.

Daisy Mae is a boar who debuted in Animal Crossing: New Horizons. She sells turnips to the player every Sunday. She takes over the role established by Joan, her grandmother, in previous games.

Daisy Mae is an orange boar, who wears a blue dress with a red bow and a white hood, with similar pound-sign patterns to Joan's work pants. She also has a drip of blue mucus running from her nose. She has black eyes shaped like ovals, brown hair, large red cheeks and a basket with turnips on her head. Her hands and feet are also brown.

Daisy Mae likes selling turnips, just like her grandmother, Joan. However, she also has a bad habit of eating the turnips she is selling, because they taste too good to her. She also appears to sneeze a lot.

Daisy Mae visits the player's island every Sunday, arriving at 5 AM and leaving at 12 PM. She sometimes indirectly mentions her grandmother, Joan, who she refers to as "Gram-Gram." If the following requirements have been met, Daisy Mae will mail the player 3 Bamboo Shoots the next day after any turnip purchase:

With the 2.0 Free Update, Daisy Mae also mails the player one of the following cooking recipes after they have purchased some turnips:

Daisy Mae is a guest character in Pocket Camp. She hosted the Daisy Mae's Pickin' Patch.

Turnips to turn a profit. 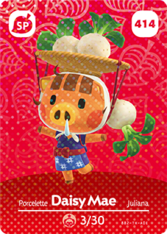