Pavé is a peacock in the Animal Crossing series who first appeared in Animal Crossing: City Folk. He appears as the holiday character corresponding with Festivale.

Pavé is a turquoise peacock with multi-colored tailfeathers. His wings, which are his arms, have bluish-green hands, and he also has a pink beak with his nose on his beak's upper part. His nose's linings are dark-pink, while its insides are bluish-purple. His big round half-closed eyes have white rims, black pupils, upper eyelids with pink makeup, and black eyeliner. His face's center has some rainbow facepaint, which has little white linings, on its left and right sides, reaching to his beak's upper part. He wears a rainbow choker with grayish-white linings and a pair of black dancing shoes with white circles with little dark bluish-green linings. His headwear, tank top, and pants are beigish-white with rainbow dots, which have little white linings, around them.

Pavé is energetic, likes dancing, and refers to himself in the third person. He loves Festivale so much, explaining why he always hosts the event on February and/or March.

Pavé first appears in Animal Crossing: City Folk as the host of Festivale, demanding a specific type of candy from the player. Candy is won during the events of Festivale and can be supplied to Pavé, which results in Pavé giving the player furniture from the Pavé Series.

Each color of candy represents a type of feeling/mentality. These are described below:

Pavé returns in Animal Crossing: New Leaf once again during Festivale. In this game, Pavé requests feathers rather than candy from the player. These feathers come in different colors; white, pink, red, orange, yellow, green, blue, purple, and rainbow. He will only take the feathers if the player gives him three of the same color; however, a single rainbow feather, despite not being very rare, will work instead of three of the requested color. The feathers are found floating around the player's town, and are caught with a net. Like previous games, he will dance and reward the player with furniture if given feathers, and will dance more vigorously if given a rainbow one.

When the player asks Isabelle to read the town's citizen satisfaction, she may read a quote by Pavé if the town has a perfect rating: "Woohoo! What a glorious town! Pavé wants to just sprawl out right here and caress the ground... Viva <town>!" 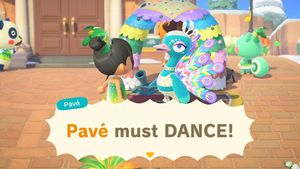 Pavé's poster can be obtained from Nook Shopping after inviting him to Photopia via his amiibo.

Prior to its removal in version 2.0, when the player scans Pavé's amiibo card and tries to invite him, he will say:

Ahahaha! You are Player. What do you want with Pavé?
Oh! Pavé is invited to your campsite? It is very unfortunate for you, but Pavé cannot go.
The dance, it calls Pavé to all corners of the globe. And Pavé heeds the call. Pavé must DANCE!
Still, do not cry. Instead, strengthen your hips! When Festivale comes again, Pavé calls on YOU to dance! 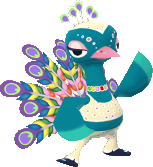 Artwork of Pavé from Pocket Camp.

Pavé makes a minor appearance in Animal Crossing: Pocket Camp as part of the Pavé's dance stage item. If this item is crafted, Pavé may appear at the player's campsite. Pavé also appears as the host of the "Viva Festivale with Pavé" garden event.

Pavé appears as a trophy in Super Smash Bros. for Nintendo 3DS.

There is no right or wrong. There is only Pavé.

In Animal Crossing: New Leaf - Welcome amiibo, the berliner in Pavé's RV is a reference to his Japanese name, Berlina (ベルリーナ), which is nearly identical to the Japanese word for berliner (ベルリーナー). 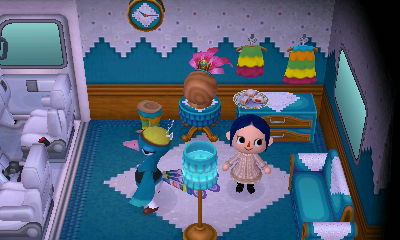 There is no right or wrong. There is only Pavé. 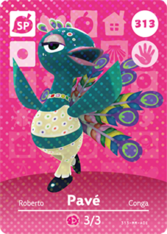