"Yaaaaaawn... I was up late last night thinking about Phyllis. Why do I always do this to myself?"
— Pete, Animal Crossing: New Leaf

Pete is a white pelican, just like Pelly, another pelican. His eyes are black and oval-shaped. His beak and legs are orange. His beak's upper part is also his nose with brownish-pink linings and dark-purple insides. His inner mouth is orangish-brown. His mailman/postman uniform is mostly green, and he carries a dark-blue bag, which he stores letters inside, with him. His bag also has a yellow/orange buckle, red decoration strings, and a yellow button.

As a mailman/postman, Pete does his job seriously and politely.

"Ah, yes. I've heard there are rumors about me and Pelly. And I really don't appreciate any of it. Pelly is nice, and she makes me very nice lunches... But...how do I put this...she's too much of a child. I'm interested in a more mature relationship."
— Pete talking about his relationship with Pelly, Animal Crossing

In Animal Crossing, Pete takes the mail after the player has sent Pelly or Phyllis five letters. He flies down towards the player's house at 9:00 AM and 5:00 PM to deliver mail and lands by the bulletin board. He will walk to each letterbox and place mail inside of each one, unless disturbed by the player, whom he will talk to. Once the mail has been delivered, he will take off and fly away within two acres. His love for Phyllis is often talked about among the villagers.

Unlike in later games, Pete's voice in this game is deep, similar to a cranky villager's voice.

"I'm in the middle of my deliveries, and I'm in a hurry! If I'm even a little late, a certain someone gets upset. But I won't tell you who!"
— Pete, Animal Crossing: Wild World

Pete continues to be the mail carrier in Animal Crossing: Wild World, but with a slightly different role. In the game, he cannot be seen delivering the mail, but can be seen flying above the town where he can be shot down with a Slingshot at exactly 9:00 AM or 5:00 PM on random weekdays, and he will not be aware who shot him down. He will not appear during rain. He can be found near the player, laying face down. Pete will proceed to get up once talked to. Once he is shot, the player will not be able to move until he falls on the ground.

His relationship with Pelly is complicated in comparison to other games. Pelly really likes Pete, but she does not think he likes her in return. In fact, Pete actually has a crush on Pelly's sister Phyllis, who in return hates him. Unlike in the first Animal Crossing, he has a higher pitched voice.

"What? I'm a mail carrier! Don't ask me if I carry babies. We ask the storks to do that."
— Pete, Animal Crossing: City Folk

In Animal Crossing: City Folk, Pete appears walking around town at 9:00 AM or 5:00 PM to deliver the mail, at the same time as he did in Animal Crossing. He will appear on any weekday in which another special visitor is not in town, and Gulliver's UFO is not due to fly over. He also appears when Nintendo sends DLC to a player. However, he randomly appears in the town, rather than flies in. He will only talk once to the player, when spoken to. Afterward, he only says that he has to get to work.

It is clear that Pete does not have feelings for Pelly in City Folk, but seems to be interested in her sister, Phyllis because she is more mature than her younger and nicer sister. When talking to him he blushes while mentioning that Phyllis' perfume smells "exotic," and giggles when he mentions that she said "good night" to him.

When he is in town, some villagers will start rumors about Pete and other villagers, some even suggesting they are in a relationship with him. If you listen to some of their conversations, snooty and cranky villagers will say how they have changed the name plates on other snooty and cranky villagers' homes to "Phyllis' House," usually involving this with other arguments, like giving other villagers fleas for revenge. In conversations between normal and snooty villagers, snooty villagers may say to address their mail to the "most beautiful girl in town," to which the normal villager will say that the last time they did that, Pete delivered the letter to Phyllis. Booker will not know when Pete is in town because Pete flies into town, rather than goes through the checkpoint.

Pete's poster can be obtained from Nook Shopping after inviting him to Photopia via his amiibo. Pete was added to the actual game in 2.0 Free Update, where he can be invited to The Roost via amiibo. If Phyllis is invited, she will bring Pelly, and Pete will sit at the counter trying not to be seen by them.

"I can deliver whatever you need delivered! Just select a request."
— Pete, Animal Crossing: Pocket Camp

Pete appears in Animal Crossing: Pocket Camp as the host of Pete's Parcel Service, a delivery service that allows players to deliver requests to various villagers without speaking to them directly. However, Pete cannot deliver items to villagers that the player has not spoken to at least once. 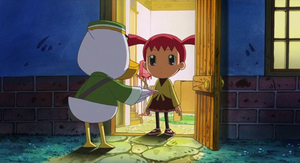 Pete makes a minor appearance in 🎬 Gekijōban Doubutsu no Mori. He delivers Margie's goodbye letter to Ai. He also makes a brief appearance during the Fireworks Festival, buying cotton candy from one of the Nooklings.

Pete appears as a collectible sticker.

Pete appears as a collectible trophy. 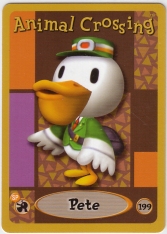 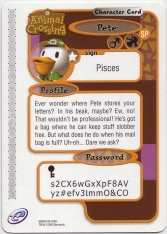 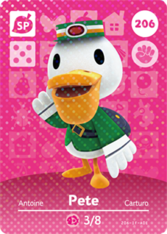