Booker is a brown bulldog with a white muzzle and paws. He has partially-closed eyes with purple eyelids, as well as five freckles on each cheek. In Animal Crossing and New Leaf, he wears a blue police officer uniform, cap, and badge, and in Wild World and City Folk, he wears a red guard uniform and a teal helmet.

Booker is very timid, often interjecting with "uh" and "um," ending sentences with "I think...," and apologizing to the player when he cannot help them. This contrasts with Copper's confidence. 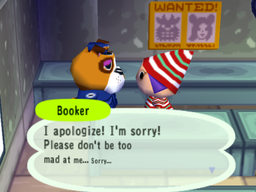 Booker in the police station in Animal Crossing.

In Animal Crossing, Booker works inside the police station, operating the lost and found. He is referred to by Copper and Tortimer as Lieutenant Booker, suggesting he is Officer Copper's superior. On April Fool's Day, Booker jokes to the player that he lost 20 pounds from his new diet of doughnuts and coffee, before apologizing for lying to them.

It is revealed in one of Booker's e-Reader card letters that he knows the people who claim items do not own them, but he does not mind because it keeps the station from getting cluttered. 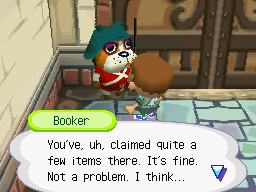 Booker at the checkpoint in Wild World.

In Animal Crossing: Wild World and Animal Crossing: City Folk, Booker stands opposite of Copper inside the checkpoint. He can show the player the lost and found, tell them if a visitor is in town, and allow the player to change the town flag. The player can also ask "Where am I?," but he will just say "Huh? Oh, no... Honestly, I'm not too sure, but what do you need to know about?" 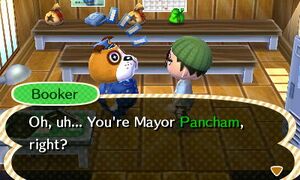 In the Welcome amiibo update, Booker can appear in his RV at the campground at random if the classic police station is not built.

Following the version 2.0 update in Animal Crossing: New Horizons, Booker can appear as a customer at The Roost. He will always be joined by Copper. Booker can also be invited to Photopia via his amiibo, after which Booker's poster can be obtained from Nook Shopping.

Booker appears as a trophy and a sticker in Super Smash Bros. Brawl.

Booker, along with Copper, has a chance of appearing as a background character in Smashville, a stage exclusive to the Wii U version. In the Nintendo 3DS version, he appears alongside Copper in a trophy.

Booker appears as a spirit in Super Smash Bros. Ultimate.

Bring all lost property to the police station.

Booker's RV only appears at the campground if the modern police station is built. It shares its colors with Copper's. 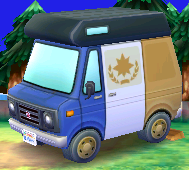 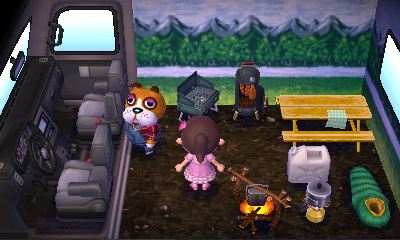 Bring all lost property to the police station. 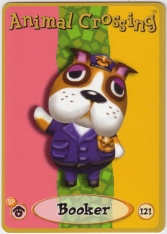 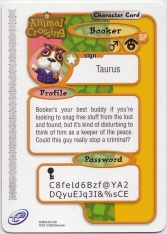 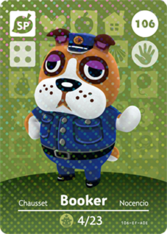