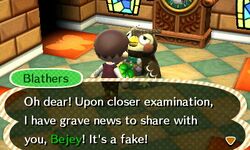 Blathers commenting on the forgery in New Leaf

A forgery is a piece of art that is fake, that may be obtained from Crazy Redd's or, starting in New Leaf, from a villager. Compared to authentic pieces of art, forgeries are close to worthless: they may not be donated to Blathers at the museum and are worth zero Happy Home Academy points. Forgeries first appeared in Animal Crossing: Wild World and appear in all subsequent games. Prior to New Leaf, there is no way to determine whether a piece of art is fake or not prior to purchasing it. 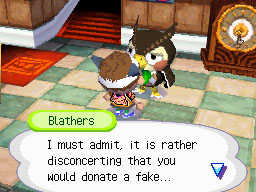 Blathers commenting that the painting given is fake in Wild World.

Tom Nook still sells paintings, although they are spotlight items and only the Famous Painting and Fine Painting are available for purchase. Outside the catalog, the primary method of acquiring new paintings is from Crazy Redd's, for double the regular price. Contrary to popular belief, there is no way to determine whether a painting is authentic or not prior to purchasing it, and Redd does not give any hints either.[1]

The painting may be identified as fake by donating it to Blathers or selling it to either Tom Nook or Timmy and Tommy, where they will comment on it. Upon doing so, the item's name changes to "forged painting". The item's name also changes after one day from purchase, even if it was not inspected. Forgeries may be sold to Tom Nook for 10 Bells.

If damage insurance is bought from Lyle, and a forged painting is given to him, the player will be mailed 100 Bells.[1] 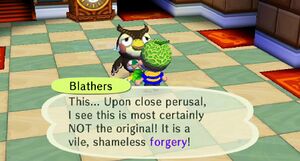 Blathers commenting on the forgery in City Folk

Out of all paintings, only the Basic Painting and the Common Painting are spotlight items, leaving the rest of the paintings obtainable only from Crazy Redd's. In addition, artwork can no longer be purchased from the catalog, which means paintings that were obtained before can only be bought again from Redd.[2]

Similar to Wild World, it is not possible to determine whether a painting is authentic or not prior to purchasing from Redd; however, Feng shui plays a role in increasing the probability of a painting bought being authentic.[3]

Similar to Wild World, forgeries may be sold to Tom Nook or Timmy and Tommy for 10 Bells.[2] 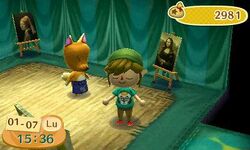 Paintings and statues are no longer sold at Timmy and Tommy's store, leaving the player with Crazy Redd's as the primary means of acquiring art. Compared to older versions, however, Redd offers four articles of art every time he sets up his tent, and determining an artwork's authenticity just by looking at it (that is, before purchasing) is now possible. In addition, some paintings, such as the Calm Painting, are guaranteed to be authentic.

It is possible that Redd offers two authentic pieces of art[4] (although only one may be purchased). It is also possible that he will offer none.[5] Feng shui appears to affect the probability of more (or less) genuine pieces of art appearing.[6]

Villagers may also offer the player to buy paintings (but not sculptures) from them. They will offer a slightly lower price, although they do not know whether their painting is authentic or not, thus making the purchase a gamble. Feng shui also appears to affect the probability of paintings sold by villagers being genuine.[6] Obviously, some paintings sold by villagers are guaranteed to be authentic (such as the aforementioned Calm Painting).

Blathers, Timmy and Tommy, and Reese will identify that an artwork is fake—the former will refuse to accept the forgery, whereas the latter two will charge the player a disposal fee of 100 Bells. 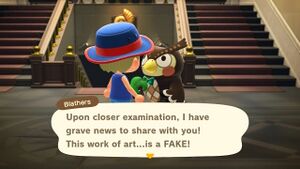 Paintings and sculptures are sold at Jolly Redd's Treasure Trawler following the 1.2.0 update. Like in Animal Crossing: New Leaf, forgeries have visible differences once again. However, the differences are not the same as in Animal Crossing: New Leaf. Like before, Redd may have more than one genuine artwork in stock (although the player can only buy one), or he may have none at all. When buying an artwork, the player will have the option of looking closely at it.

Blathers or Timmy and Tommy will identify if an artwork is a forgery; should that be the case, Blathers will refuse to donate it to the museum and Timmy or Tommy will refuse to buy the artwork. The only way to dispose the fake artwork is to use a waste bin furniture item. 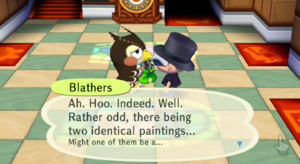 Blathers in City Folk reacting to a duplicate painting, wondering if one of them is forged.
Retrieved from "https://nookipedia.com/w/index.php?title=Forgery&oldid=1050004"
Categories:
Hidden category: