Discobolus
Artist: Artist Unknown
Made in the 2nd century
Marble

As with all artwork in Animal Crossing: New Horizons, the robust statue was added in the 1.2.0 April Free Update. 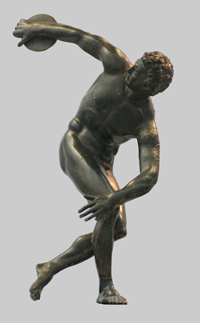 Discobolus was originally made of bronze. The original Greek bronze is lost but the work is known through numerous Roman copies, both full-scale ones in marble, which was cheaper than bronze, such as the first to be recovered, the Palombara Discopolus, or smaller scaled versions in bronze.