The twinkling painting is a painting in Animal Crossing: New Horizons introduced in the 1.2.0 April Free Update. It is based on Vincent van Gogh's The Starry Night; it is one of two van Gogh pieces to be appear in the Animal Crossing series, alongside the flowery painting. 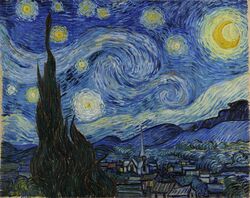 Painted in 1889, The Starry Night depicts a sky full of stars, just before the sunrise, and it remains one of van Gogh's most iconic works—and one of the most iconic pieces of art in western culture as a whole—for its distinctive, heavily post-impressionist imagery, even compared to van Gogh's other works. The meaning of the painting was never explicitly stated by the artist and as such has become a breeding ground for interpretations, ranging from artistic abstraction to a reflection of van Gogh's deteriorating mental state (with him having been institutionalized the previous year following a mental breakdown, before suffering a second one the month after the painting's completion; the painting specifically depicts the view from the window of his asylum cell, and van Gogh would commit suicide shortly after in 1890).