The academic painting is a painting in Animal Crossing: New Horizons introduced in the 1.2.0 April Free Update. It is based on Leonardo da Vinci's Vitruvian Man; it is one of three da Vinci pieces to appear in the Animal Crossing series, alongside the famous painting and the serene painting. 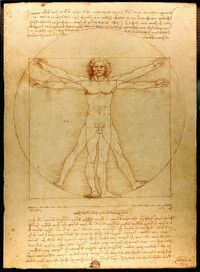 Made by the Italian polymath Leonardo da Vinci in about 1490, Vitruvian Man is accompanied by notes based on the work of the Roman architect Vitruvius. The drawing, which is in ink on paper, depicts a man in two superimposed positions with his arms and legs apart and inscribed in a circle and square. Despite being referred to as a painting in the game, it is not actually a painting.