In New Leaf, the statue is displayed in the first artwork room, in the southwest quadrant.

Bust of Nefertiti
Artist: Thutmose
Made around 1345 BC
Limestone

As with all artwork in Animal Crossing: New Horizons, the mystic statue was added in the 1.2.0 April Free Update. 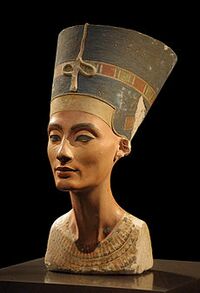 Sculpted by royal sculptor Thurmose circa 1345 BC, this limestone bust features Nefertiti, the Great Royal Wife of the Egyptian Pharaoh Akhenaten. Akhenaten was controversial both in his own time and in the centuries afterwards for his abolishment of Egypt's traditional polytheistic religion, instead replacing it with Atenism, a belief system revolving around the sun disc Aten; theologists vary as to whether Atenism was an early monotheistic faith or if it acknowledged the existence of other deities while only worshiping one. Following Akhenaten's death, a damnatio memoriae was placed on him and the polytheistic faith was restored.

Contrary to her husband's polarizing reputation, the bust of Nefertiti is considered one of the most acclaimed and well-known artifacts from ancient Egypt, becoming symbolic of the country and its history following its 1912 discovery by German Egyptologist Ludwig Borchardt in the remains of Thurmose's workshop. Consequently, it has been the subject of a lengthy repatriation dispute that stretched all the way back to its first public exhibition in 1924, with Egyptian officials claiming that the bust was smuggled out of the country to fulfil German colonialist interests. The bust currently remains in German hands, being on permanent display in the Neues Museum in Berlin.