The great statue is a statue in the Animal Crossing series introduced in Animal Crossing: New Leaf. It is based on Thomas Ridgeway Gould's King Kamehameha I.

King Kamehameha I
Artist: Thomas Ridgeway Gould
Made around 1880
Bronze

As with all artwork in Animal Crossing: New Horizons, the great statue was added in the 1.2.0 April Free Update. 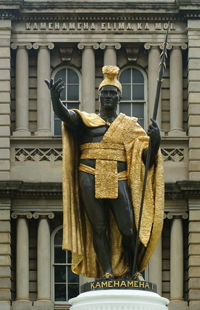 Sculpted by Thomas Gould in Florence, this 18-foot bronze statue of Kamehameha is one of Oahu's most photographed landmarks. Every June 11th, on Kamehameha Day, this statue is ceremoniously draped with wreaths of flower lei to celebrate Hawaii's greatest king.

A great warrior, diplomat, and leader, King Kamehameha I united the Hawaiian Islands into one royal kingdom in 1810 after years of conflict. Kamehameha's unification of Hawaii was significant not only because it was an incredible feat, but also because under separate rule, the islands may have been torn apart by competing western interests. Today, four commissioned statues stand to honor King Kamehameha I, Hawaii's first king.