The warrior statue is a statue in Animal Crossing: New Horizons introduced in the 1.2.0 April Free Update. It is based on the Terracotta Army. 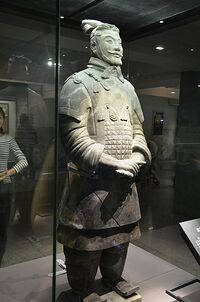 The Terracotta Army is a collection of terracotta sculptures depicting the armies of the first Emperor of China, Qin Shi Huang, who was obsessed with immortality. After his death in 210 BC, Emperor Qin was buried at the center of a grand necropolis complex that had started construction when he first ascended the throne, and the army of statues, including thousands of soldiers and numerous horses and chariots, was placed in military formation close to his tomb to protect the emperor in the afterlife. Chinese farmers digging a well near Xi'an discovered Emperor Qin's burial place, as well as the Terracotta Army, on March 29, 1974. Since then, the complex has been under continuous excavation.