In New Leaf, the statue is displayed in the second artwork room, in the northwest quadrant.

Venus de Milo
Artist: Artist Unknown
Made around 130 BC
Marble

As with all artwork in Animal Crossing: New Horizons, the beautiful statue was added in the 1.2.0 April Free Update. 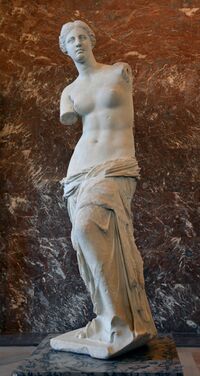 Venus de Milo is a marble sculpture thought to be crafted some time between 130 and 100 BC by Alexandros of Antioch. As one of the most famous works of Greek sculpture, it is commonly believed that the statue depicts Aphrodite, the Greek goddess of love and beauty.

The statue was originally found broken in pieces within the ancient city ruins of Milos. The two pieces that remained mostly intact were the upper and lower body. Discovered with the two pieces were portions of the upper arm, and a left hand holding an apple. The original pose of the statue remains a mystery.