Summer
Artist: Giuseppe Arcimboldo
Made around 1573
Oil on canvas

As with all artwork in Animal Crossing: New Horizons, the jolly painting was added in the 1.2.0 April Free Update. 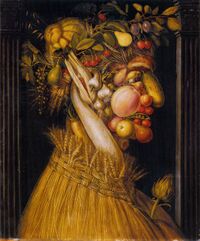 Summer is a portrait composed of fruits and vegetables painted with oil on canvas. In real life, this painting was part of a series called the Four Seasons, painted in the mid-1500s. The other members of the series were named after the other three seasons, with each one depicting fruits and vegetables that can be harvested or matured during that season. Only Summer and Winter still exist in the present day.