Crazy Redd's (known as Crazy Redd's Furniture Emporium in Animal Crossing and Redd's Gallery in New Leaf) is a store run by Redd, a fox with a shifty nature. The shop contains items that can also be bought from Tom Nook in his store, but for a higher price, as well as items sold exclusively by Redd which cannot be found anywhere else.

The shop also sells paintings which can be forgeries — these can be identified by Blathers, or when the player attempts to sell them. Most paintings (and all paintings beginning in New Leaf) are sold here.

In New Horizons, the store is replaced by the Jolly Redd's Treasure Trawler.

The exterior of Crazy Redd's Furniture Emporium in Animal Crossing 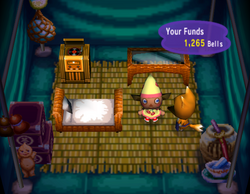 In Animal Crossing, Crazy Redd's Furniture Emporium appears once a month. Before he arrives in town, Redd sends the player a letter telling them the date at which he will set up his tent. On this date, the player can find Redd's tent in town, having replaced a random signboard. The player can ask Copper for his location. He sells furniture and paintings, the latter of which can be donated to the museum. However, he charges four times as much as Tom Nook would charge for the same items.

Items sold at Redd's have a chance of being items that cannot be found at Tom Nook's. The chance of these items appearing goes up with red, green, and orange fêng shui, with the chance being 70% per item at maximum item luck fêng shui.

Crazy Redd's Furniture Emporium also appears on Sale Day, which is the day following the Harvest Festival and the fourth Friday in November. On Sale Day, Redd will reappear in another acre with more items after his entire stock is purchased. This happens indefinitely throughout the whole day. 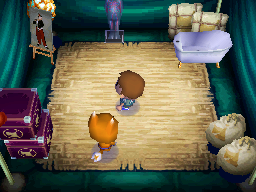 Inside Crazy Redd's in Wild World

In Animal Crossing: Wild World, Crazy Redd's appears once a week outside town hall and requires a password to enter. If the player has not yet visited the shop, a villager will tell them the password on the day the shop is in town. Once the player enters Crazy Redd's, they must purchase a membership for 3,000 Bells. Redd will not extend this membership if the player has insufficient Bells. With the membership, the player can purchase items from the shop and Redd will send them a letter containing the shop's password every week the day before he visits. When signing up for insurance with Lyle, the player will be asked which day of the week they would like Redd to visit on.

Crazy Redd's contains three furniture items, with one always being a painting. The painting has a 50% of being a forgery, and the other two furniture items each have a 50% chance of being either an exclusive Redd item or a standard item available from Tom Nook's store. Redd charges double for all furniture items in his shop. For example, purchasing a Solemn Painting in Crazy Redd's costs the player 3,920 Bells whereas buying it from the Catalog costs 1,960 Bells. 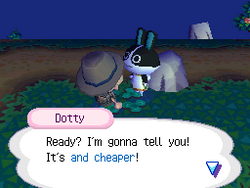 A villager providing the player the password to Crazy Redd's 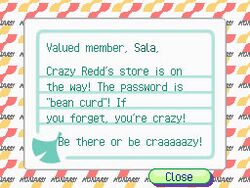 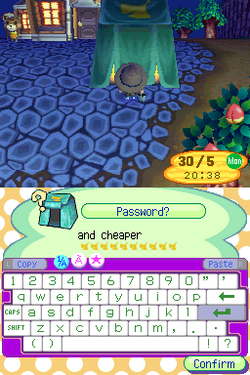 Each password starts with the first part of a phrase given by Redd, and the player must complete the phrase. 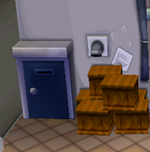 The exterior of Crazy Redd's in City Folk 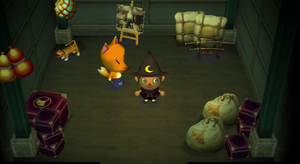 Inside Crazy Redd's in City Folk

In Animal Crossing: City Folk, Crazy Redd's appears as a small building in the city to the left down what villagers call a "dark alley", in what is described as a "shifty" part of the city. It is open from 10:00 AM to 1:00 AM. No one is allowed inside without an invitation, which must be given to the player by a villager in their town, or another playable character who has been given an invite by Redd himself. Even with an invitation, there is a one-time fee of 3,000 Bells to enter, but he gives the player 1,000 Bells for every player they send an invite card to that visits, similarly to a pyramid scheme. Similar to previous games, the majority of the game's paintings can be bought only from Crazy Redd's. A number of these paintings can be forgeries, however, which can be identified by Blathers and Tom Nook. Usually, after traveling ahead in time, Crazy Redd's will be closed until the next Wednesday. 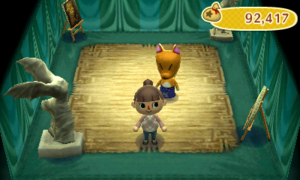 Inside Redd's Gallery in New Leaf

In Animal Crossing: New Leaf, Redd's Gallery appears on certain days in the event plaza, near the town tree. The player can also check for the presence of Redd's Gallery by visiting the police station, where Booker or Copper will inform the player of his visit. He appears on a random day, except Sunday, and no more than once per week. He may not visit at all on a given week. The shop will only offer works of art. He sells four works of art at a time. Players can examine the item they want to buy. When a player makes a purchase, he does not give the item to them right there and then; instead, he marks it off as sold, and mails it to them, where it arrives the next day. Once players have made a decision, they cannot change the item; in addition to this, players can only purchase one work of art from Redd in a single day, even if they visit another town where his tent is set up.

Only one player is allowed in Redd's Gallery at a time. In multiplayer, when there's already a player inside the building, other players cannot enter.

In 🎬 Gekijōban Doubutsu no Mori, Crazy Redd's store is set up during the Fireworks Show. However, unlike the games, Redd is selling his goods outside of his tent, while his supplies are all hiding inside. Redd tricks Yū and Alfonso into purchasing a fake Golden Slingshot. Claiming that the fake Slingshot was rare, he actually had an entire box filled with them hiding inside his tent.

In City Folk, Redd's is the one out of two places paintings can be purchased. Another place is Tom Nook's though it is very rare. Any painting can appear at Redd's, but only the Basic Painting and the Common Painting can appear at Nook's. However, when buying paintings from Crazy Redd's, there is always a chance that the painting is a forgery. But paintings from Tom Nook are guaranteed to be genuine. This is found out when a player tries to donate or sell the item, in which case Blathers or Tom Nook will point out the duplicity. Forged paintings can be sold for 10 Bells, and have a Happy Room Academy value significantly less than that of the original painting.

In New Leaf, as in Animal Crossing: City Folk, Redd's shop is the only place to obtain artwork, but he no longer sells furniture at his shop. Now it is possible to spot fakes in the art on display by looking closely at the details of the artwork. Players can also use the D-Pad to change the camera angle to get a better view of the artwork if required. If the player tries to sell Reese a forged piece of artwork, she will recognize it as such and charge a 100 Bell disposal fee like with any other junk item.