It has been proposed that this article be split into Item:NES (Animal Crossing) and Item:Disk System (Doubutsu no Mori+).
Please share your thoughts on the matter at this article's talk page.

It has been proposed that this article be split into Item:NES (Animal Crossing) and Item:Disk System (Doubutsu no Mori+).
Please share your thoughts on the matter at this article's talk page.

The NES is a furniture item in every first-generation Animal Crossing game. It can be placed on the surface of tables and other similar furniture that have surfaces for items. The player can interact with this item to bring up a dialog that says, "I want to play my NES, but I don't have any software."

The NES can be obtained from Crazy Redd's Furniture Emporium for

3,000 Bells, Wisp, a treasure hunt, or trees when the player has good luck. It does not have any color for the purpose of fêng shui. This item is lucky, meaning it gives a 777-point Happy Room Academy bonus when placed in the player's house.

In 2018 it was discovered that when the NES is interacted with, the game scans the Memory Card (Controller Pak in Doubutsu no Mori) for NES ROM data. NES ROMs, including those not already in the game, can be patched and placed on a Memory Card, where they can be loaded and played by interacting with the item.[1] Interacting with the item with multiple NES ROMs on the Memory Card displays unique text that is normally unused: "Should I play my NES software?", followed by a list of games. 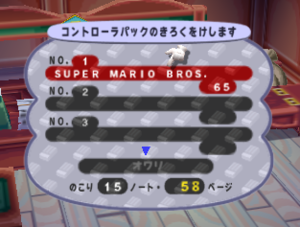 In Doubutsu no Mori only, if the Controller Pak has NES ROM data on it, selecting the "てがみをほぜんしたい" ("Save a letter") option at the post office brings up a normally unused menu titled "コントローラパックのきろくをけします" ("Erase Controller Pack Records"), where the NES game data can be viewed and deleted. In the iQue Player version, the Chinese title text for the menu is corrupted and the original Japanese text is left untranslated for all other text in the menu.