In Animal Crossing, Donkey Kong 3 can be obtained from Tom Nook after providing a secret code that could be generated on the game's official website in November 2002.[1] For Doubutsu no Mori e+, the code was given to those who joined Panasonic hi-ho's "Doubutsu no Mori Photo Club" (どうぶつの森 写真くらぶ).[2] It can also appear in the catalogue if the player's data is transferred from a Doubutsu no Mori+ save file where they owned it (it was a common NES game), but it is not for sale.

For the purpose of fêng shui, its color is red. This item is lucky, meaning it gives a 777-point Happy Room Academy bonus when placed in the player's house.

Donkey Kong 3 in Doubutsu no Mori+ 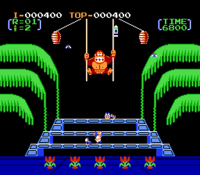 The first level of Donkey Kong 3, the Blue Greenhouse

Donkey Kong 3 is an arcade game in the Donkey Kong series that was later ported to the Nintendo Entertainment System.

In a departure from the previous two Donkey Kong arcade games, which are platformers, Donkey Kong 3 is a shooter. The player controls a bug exterminator named Stanley, who must drive Donkey Kong out of his greenhouse by spraying him with insect repellant to push him up until he reaches the top of the screen. Additionally, the player must protect Stanley's plants from various insects that fly toward them. Once Donkey Kong is pushed to the top of the screen, the game moves onto the next level; on the third level, Donkey Kong is pushed into a beehive and is defeated.