Gomoku Narabe (ごもくならべ, Gomoku Narabe?) is a furniture item in Doubutsu no Mori+. It can be placed on the surface of tables and other similar furniture that have surfaces for items. The player can interact with this item to play Gomoku Narabe Renju.

Gomoku Narabe can be obtained from the raffle, Wisp, a treasure hunt, or trees when the player has good luck. For the purpose of fêng shui, its color is red. This item is lucky, meaning it gives a 777-point Happy Room Academy bonus when placed in the player's house.

For more information about this game, see its corresponding article on Wikipedia (Japanese). 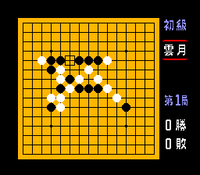 There is a two-player mode and a single-player mode where the player competes against a computer of one of three difficulties ("初" for beginners, "中" for recurrent players, and "上" for professionals).

Gomoku Narabe Renju on other wikis