Balloon Fight is a furniture item in every first-generation Animal Crossing game. It can be placed on the surface of tables and other similar furniture that have surfaces for items. The player can interact with this item to play Balloon Fight.

Balloon Fight can be obtained from the raffle, Wisp, a treasure hunt, or trees when the player has good luck. It can also be obtained in a letter from Jingle on December 25 if the player received at least one gift from him the previous night before midnight and played when the clock hit midnight. It does not have any color for the purpose of fêng shui. This item is lucky, meaning it gives a 777-point Happy Room Academy bonus when placed in the player's house. 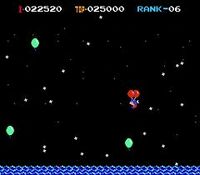 Balloon Fight (バルーンファイト, Barūn Faito?) is an action game originally released on the Famicom in Japan on Janaury 22, 1985, and on the Nintendo Entertainment System in North America on June 18, 1986 and in Europe on March 12, 1987. An arcade version of the game, Vs. Balloon Fight, was released earlier in North America in September 1984, in Japan on October 3, 1984, and in Europe sometime in 1987.

Balloon Trip is another gameplay mode that is a side-scroller platformer. The player has to avoid obstacles and get balloons, aiming for the high score. The player starts this mode with only one life.

Balloon Fight has been referenced numerous times in various Nintendo media since its release. Despite this, the game has received mixed reviews from critics. Due to the game being featured in Animal Crossing, the Villager in Super Smash Bros. for Nintendo 3DS / Wii U uses "Balloon Trip" for his up special and recovery action, summoning a pair of balloons and wearing a helmet similar to that worn by the protagonist of Balloon Fight. Their falling animation afterward also resembles the animation used when losing a life in the original game.

Balloon Fight on other wikis