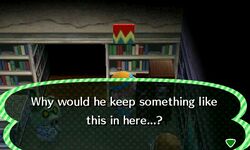 A player looking inside a villager's storage unit

In Doubutsu no Mori, an individual storage unit can save a single item, but there is no limit to the number of units that can be placed in a house. In Doubutsu no Mori+, Animal Crossing and Doubutsu no Mori e+, up to three items can be stored in each storage space. In Wild World a common storage space is introduced which is shared between every storage unit in the house. Each player has their own individual storage space, and can save up to 90 items. In City Folk, this is increased to 160 spaces and a player's storage can also be accessed in the Auction House by selecting the "Checkroom" option. In New Leaf, the storage space is increased again to 180 spaces. In addition, the train station and museum contain lockers that can access the storage space, even when a player is visiting another town. In the Animal Crossing: New Leaf Welcome amiibo update, a house expansion called the Secret Storeroom can be bought from Nook's Homes for

158,000 Bells. The Secret Storeroom offers 360 storage spaces that are separate from the existing home storage.

In Animal Crossing: New Horizons, storage is now built into the player's home, with the amount of items that can be stored increasing as the house expands. Only two storage units were added as of 2.0, with other similar items now used as a wardrobe for changing the player's clothes. In version 1.6.0, the maximum storage was increased from 1,600 items to 2,400 items. The player must pay Tom Nook

500,000 Bells at Resident Services in order to upgrade to the higher capacity, and this amount must also be paid all at once. In version 2.0, maximum storage became 5,000 items. It is a three-stage upgrade, and at every stage the player must pay Tom Nook a higher amount of Bells at once. 3,200 items of storage costs

If the player interacts with a storage unit outside of their own house, one of the following messages will be displayed: