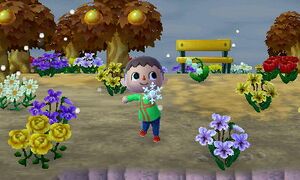 In Animal Crossing: New Leaf, Snowflakes can be sold for 500 Bells, or used to obtain a piece of furniture from the Ice Series. However, they cannot be placed in a storage device in the player's house. To obtain the furniture, the player must find two snowballs. The player must build a Snowmam, the second smallest type of "snow-person." The Snowmam will ask the player to fetch five snowflakes, three if she is built perfectly. However, if the Snowmam is built completely out of proportion, she will not accept snowflakes at all and the player will have to build another one. Once the requested amount of snowflakes are given to the Snowmam, the player will receive a piece of Ice-themed furniture. The pieces of the furniture are given in a sequence, so the player will never get repeats until they have the entire set.