Not to be confused with radios, a type of furniture that shuffles between different K.K. Slider music. 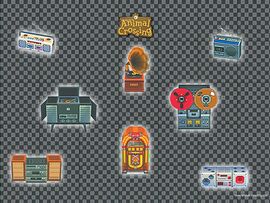 Wallpaper of the collectible stereos in Animal Crossing

Stereos are a type of furniture obtainable in the Animal Crossing series. They are used to play K.K. Slider's songs.

In Doubutsu no Mori, a stereo can store only one aircheck at a time, as opposed to all subsequent games where a stereo can store all of them. In games prior to Animal Crossing: New Leaf, players start with a tape deck when they move into their house.

In Animal Crossing: New Horizons, the type of the stereo does not change the music itself, but can affect the audio quality of what is being played. Music players are internally sorted as follows: Hi-Fi (studio quality), Retro (slightly lower quality), Cheap ("tinny" quality), and Phono (muffled quality, adds pitch wobble and static).