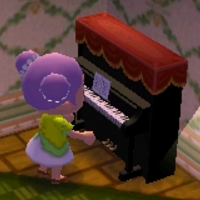 A player interacting with an upright piano in New Leaf

Although instruments appear in Animal Crossing, they are not part of a collection.