A mushroom on the ground in Animal Crossing.

In Doubutsu no Mori, Doubutsu no Mori+, Animal Crossing, and Doubutsu no Mori e+, there is only one type of mushroom, known simply as mushroom. They are valuable items that can be sold at Tom Nook's store for 5,000 Bells each. Mushrooms can be found from October 15 to October 25 between 8:00 AM and 9:15 AM. At 8 AM, five mushrooms appear near random trees in different acres around town. Every 15 minutes after 8 AM, one random mushroom will disappear due to being found by a villager. To obtain all five mushrooms, the player must collect them all before 8:15 AM. If mushrooms are picked up and dropped again, they may still disappear on each 15-minute interval until 9:15 AM.

A mush end table disguised as a flat mushroom in City Folk.

In Animal Crossing: City Folk, there are five different types of mushrooms—flat, round, skinny, elegant, and rare—appearing throughout the month of November. During November, six mushrooms spawn throughout the town each day. One of the six mushrooms will be a piece of the Mushroom Series disguised as a mushroom. Rare mushrooms only appear if the town has attained perfect status, buried underground. Players may either sell or eat mushrooms they find. 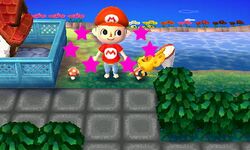 A player under the effect of a famous mushroom in New Leaf.

In Animal Crossing: New Leaf, mushrooms can be found near tree stumps during fall and, like in City Folk, can be an item from the Mushroom Series. In addition to the five mushrooms found in City Folk is the famous mushroom, valued at 16,000 Bells. Once eaten, the famous mushroom, which is designed after a Super Mushroom from the Super Mario series, will cause the player to temporarily grow in a fashion similar to Mario when collecting a Super Mushroom. Rare mushrooms may only be found buried underground near trees and tree stumps once a perfect town rating has been earned.