Dandelions are plants in the Animal Crossing series that appear randomly in the player's town from March to December. They resemble yellow cosmos but has a color similar to yellow tulips, just like their real-life counterpart. After a few days, they become a dandelion puff. If the dandelion puffs are left alone for a few days, it will disappear from the town.

Dandelions are considered flowers in the game and do not affect the town's environment and will grow even when the "Keep Town Beautiful" ordinance is up in Animal Crossing: New Leaf. If any dandelions are planted or are still around in winter, it will remain as a flower until March, to which it will then turn into a dandelion puffs.

The player can hold a dandelion puff; while holding one, the player can press "A" (or blow into the microphone in New Leaf) to blow on the dandelion puff, resulting in the seeds floating away. This can be done only for fun, and has no important use. In Animal Crossing: New Leaf however, doing this can cause new dandelions to appear where the puffs were blown, possibly the next day. 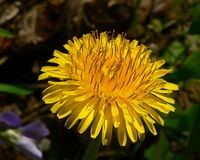 The flower of a dandelion in real life. 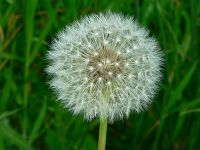 The seeds of a dandelion in real life

Taraxacum officinale, also known as the common dandelion (or just simply called dandelion), is a flowering herbaceous perennial plant of the family Asteraceae (Compositae). It can be found in mild warm to cool climates around the world, they can be found in lawns, in between pavements on roadsides, and any place where there is moist soils. While these plants are considered a weed, it is sometimes used as a medical herb and in food preparation.

It has a milky latex and the stems can be either glabrous or sparsely covered with short hairs. The leaves are 5 to 45 centimeters long and 1 to 10 centimeters wide, with a shape of either oblanceolate, oblong, or obovate.

The fruits, which are called cypselae, have many colors ranging from olive-green, olive-brown, straw-colored or grayish. They are oblanceoloid in shape and 2 to 3 mm long with slender beaks. The fruits have 4 to 12 ribs that have sharp edges. The silky pappi, which form the parachutes, are white to silver-white in color and around 6 mm wide.