Grass is a type of flora in the Animal Crossing series that covers much of the player's town/island (in the areas not covered by buildings, pavement, and dirt). In early December, snow falls and replaces all of the town's grass. On February 25th, the snow melts, and the grass comes back. In September, the grass begins to become lighter to turn darker and browner in October and November.

In Animal Crossing, any part town not occupied by pavement or buildings is grass. There were only a few spots occupied by dirt, and those are designed in figure 8-like shapes.

In Animal Crossing: Wild World, more of the land was occupied by dirt rather than grass. 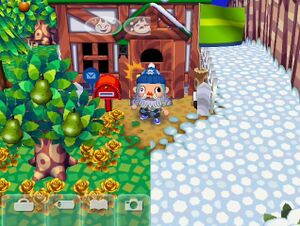 The comparison of grass and snow in City Folk.

In Animal Crossing: City Folk, the player starts out with an almost complete town of grass. However, as the player plays the game, the grass starts to disappear. This process is called grass deterioration, and happens in areas where the player walks (and usually walks/runs most often).

Grass deterioration returns in Animal Crossing: New Leaf, but it is not as prominent as it is in City Folk. Also, the town is not filled with grass; there are patches of dirt scattered throughout the town.

Grass deterioration has been removed in Animal Crossing: New Horizons and the land starts with no dirt patches. Instead, dirt is tied to the Island Designer app when unlocked, allowing players to create their own dirt patches and pave paths to their liking.

There are six different designs for snow/grass in the Animal Crossing series. The patterns change when grass turns to snow and vice-versa.

Tortimer Island is also randomly-generated to feature one of the three grass patterns. Since the season there is always summer, the grass shape and color do not change.