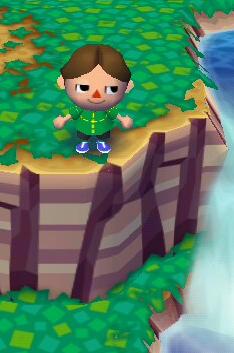 The cliff that runs through the middle of town.

A cliff is a sheer face of rock that typically defines the edges of town. The river that flows through the town connects to the sea through waterfalls which flows down the cliffs.

In Animal Crossing and City Folk, cliffs can be formed through the middle of the town as towns can be multi-tiered. In the former game, there is a rare chance for a town to contain three levels, but the latter is capped at two despite code for a third level existing in the game's data. Inclines provide access between the different levels. In Wild World towns are entirely flat, and in New Leaf the only separation in level is between the town itself and its beach.

Islands in New Horizons have three levels, with pine trees and flowers growing naturally on the higher levels. For the first time in the series cliffs can be scaled using a Ladder. There are no natural inclines in the game, so they must be built manually in order to provide easy access between the different tiers. With the Cliff Construction Permit, players can manually create or remove cliffs in any part of the island. They can also create a fourth tier of cliffs, though these are not scalable and merely serve effectively as walls.

In Wild World and City Folk, the checkpoint is built into a parting in the cliffs and serves as the only entrance to the town. In Animal Crossing: New Leaf - Welcome amiibo, an opening with an incline is formed in the cliff to the side of the town and leads to the campground. When visiting Dream Worlds the incline will be blocked by barriers, preventing access to the campground.

In Animal Crossing: City Folk, it is possible for the cliff running through the middle of town to form parallel with the cliff on the edge of town, creating a canyon shape. 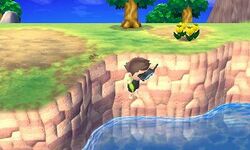 This page could be improved with the addition of images.
You can help by uploading one or more images and including them on this page.
Retrieved from "https://nookipedia.com/w/index.php?title=Cliff&oldid=1056797"
Categories:
Hidden category: