The icon for Island Designer in New Horizons.

The Island Designer Construction Permit (also known as simply Island Designer) is a permit in Animal Crossing: New Horizons that allows the player to customize their deserted island however they want. The app comes with 2 default functions: tools for landscaping and waterscaping, and an option to clear items around the player and move them to the recycle box in Resident Services. 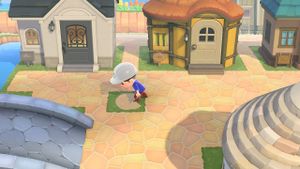 Once the player unlocks the Island Designer app, two paths are available to use, the grass and dirt paths, with more styles like brick and stone available in exchange for Nook Miles. To create a path, the player must be on a grass tile to use the tool, with the sole exception of the Custom Design path which can be used anywhere. Once selected, the player will wipe the ground to immediately place down a path.

The player can remove a path either by using the Grass path or by wiping it away using the same path type. Paths can also be rounded if the path is on the edge of a perpendicular pathway. 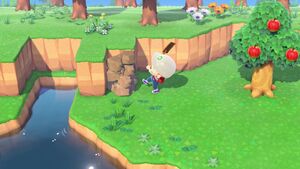 A player creating a cliff

After unlocking the Island Designer app, if the player heads over to the Nook Stop, they will be able to exchange

6,000 Nook Miles for a cliff construction permit. With this permit, the player can put up cliffs and tear them down, allowing them to shape their island to their liking. The player can round out a cliff by hitting its edge.

This is the only way to have a fourth tier on the player's island; however, inclines cannot be placed against cliffs of this higher tier, and the game will claim it is too dangerous to climb any higher if they attempt to climb it with their Ladder.

There are limitations on using the cliff construction permit. 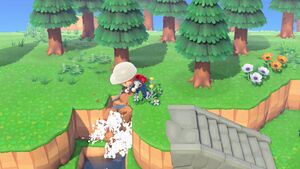 A player creating a waterfall

After unlocking the Island Designer app, if the player heads over to the Nook Stop, they will be able to exchange

6,000 Nook Miles for a waterscaping permit. With this permit, the player may edit water on their island, allowing them to make their own rivers, ponds, and waterfalls. The player can round out a river by hitting the land where two waterways collide.

There are limitations on using the waterscaping permit.

An additional feature of the Island Designer app is the Cleanup Service, which allows the player to clean up any items around them. Any trees, shrubs, and lost items are removed immediately, with placed furniture items and dropped items being placed in the recycle box. Dropped items must be placed on top of another furniture item in order to be placed in the recycle box. Flowers cannot be removed using this feature.

There are a few parts of the island that can not be constructed or have paths placed on.

There are also some restrictions to what the player can do while using the Island Designer Construction Permit:

The Island Designer app cannot be opened on a Mystery Island, while the player's gates are open, on Harv's Island, while inside a building, or on another player's island.

Starting and Stopping Construction: "Please use the app to properly begin and end construction."

Switching Between Permits: "During construction, you can press the + Button to switch permits."

"Please note: Your permits for Island Designer app are only valid for use on <Island Name>. If you leave the island, construction will end. Always wear a helmet, and always work with safety in mind!"

Path Construction Guide: "Press A while on grassy areas to create or remove paths."

Waterscaping Construction Guide: "Press A to dig into the ground and create new rivers, ponds, etc. You can also fill them in."

Creating Waterfalls: "Try digging atop a cliff to create a Waterfall."

Building Cliffs On Top Of Cliffs: "You can stack cliffs, but not right at the edge. No building giant walls! Start by making a big base with lots of surface area before moving up to the next tier."

Destroying Waterfalls: "First use the waterscaping permit to fill in the waterfall. After that, you can destroy the cliff at will."

Cleanup Service Guide: "Sometimes, when you're working on construction projects, you might accidentally find yourself in a pinch. Perhaps something you put out keeps you from moving around, or you can't grab an item up on a cliff. The cleanup service is for these moments where you need the items around you cleaned up a bit. The cleanup service will only work on placed items, fencing, and trees in your immediate vicinity. Make sure you get close to the items causing you trouble before you apply for the service. Items picked up by the service will be deposited in the recycle box at Resident Services. So don't delay in picking up those items from the box!"