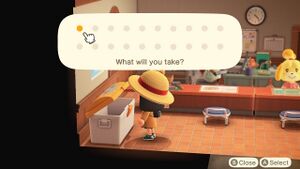 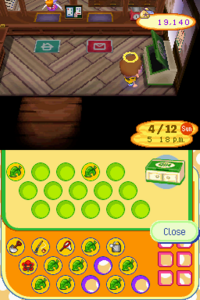 In Animal Crossing: New Horizons, the recycle box is located within the Resident Services building, on the left-hand side. Each day, there is a 45% chance of an item appearing in the box if there are less than 10 items already inside; items that can appear include three Clay, three Iron Nuggets, a small furniture item, an item of clothing, a flower bag, a Sapling, Cedar Sapling, a wallpaper, or trash. Each of these items has an equal chance of appearing. Of the clothing items that can appear, five can exclusively be obtained from the recycle box. On the day after Gulliver or Gullivarrr visits, a Rusted Part will appear in the recycle box. When a villagers moves away from an island, a Cardboard Box and one of their furniture or clothing items will appear in the recycle box.

Unlike in previous games, items cannot be placed in the recycle box directly. However, any items placed outside will appear in the box if the Cleanup Service is used, and any items within other players' pockets at the end of local co-op multiplayer will also appear. A maximum of 80 items can be stored in the recycle box, though only up to 60 are visible at a time. After the maximum is reached, the oldest items are removed.

The following items can be obtained exclusively from the recycle box in New Horizons.