The pockets, also known as the inventory, are what the player character uses to carry around items in the Animal Crossing series.

Prior to Animal Crossing: New Horizons, there is a space for letters in the player's pockets, including ones that villagers ask the player to deliver. In Animal Crossing: Wild World and Animal Crossing: New Leaf respectively, messages in bottles and time capsules are also kept here. Letters can have presents attached. Some players like to store items in presents attached to letters as extra pocket space, and remove the present when the item is wanted. If this letter section is full, the player cannot take letters out of their mailbox, and will be asked if they wish to throw letters away. Letters can be removed from this screen by either discarding them (this erases them permanently) or storing them in the Town Hall or post office. In New Horizons, as the letters purchased from the card stand are sent to be posted straight after the player finishes writing them, and letters received are permanently stored in the mailbox, they are no longer stored in the pockets.

In New Horizons, the player starts with twenty spaces in their pockets. Two expansions are available by redeeming Nook Miles: 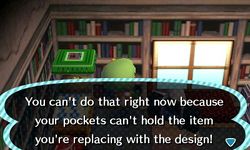 When the pockets are full and the player tries to pick up an item, catch a bug or fish or dig something up, it will give the player the choice of dropping, releasing or burying the item or swapping it with another item. If the pockets are full of fish, the item will immediately be dropped as the player cannot swap it with a fish, unless when next to a body of water to release the fish. When trying to purchase items when the pockets are full, the shopkeeper will refuse to sell anything to the player until they have room. Picking something up in a room with full pockets is impossible, as is putting away a tool or other item that can be held (except in New Horizons, where equipping a tool does not remove it from the pockets.)