In every Animal Crossing series game, a mailbox can be found outside the player's house. It is where Pete puts letters addressed to the player. When a letter arrives, a blue signal with a small blinking letter will appear on the right-top of the mailbox and will make a faint beeping sound when the player walks near it. In Animal Crossing: New Leaf, a full mailbox will be indicated by faster beeping, and the mailbox will shake rapidly. Only the owner of the house can open the mailbox.

In Animal Crossing, There is a red mailbox with "POST" written on it. It may hold up to 10 letters. If a player attempts to mail something to a player whose mailbox is currently full, Pelly or Phyllis will tell the player that the other player's mailbox is full, and to ask them to clear out their mailbox. If the player is in the same acre as the houses and the clock turns to 9:00 AM or 5:00 PM, Pete will fly down and deliver any sent mail. At this time, the player may talk to him, and he may attempt to deny rumors about him having a crush on Phyllis. If there is nothing in the Post Office when the clock changes, there will be no mail to deliver, and thus Pete will not show up.

In Animal Crossing: City Folk, the mailbox functions the same as in Wild World but since there are once again 4 separate player houses, there are now 4 mailboxes. Around 9:00 AM, the player can find Pete wandering around the town, but the player cannot find him putting mail into the mailboxes. The mailbox still holds up to 10 letters. 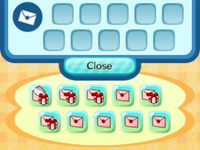 The mail inventory in New Leaf.

The mailbox in Mermaid style.

In Animal Crossing: New Leaf, different forms of mailboxes are available to buy from Tom Nook at his new shop, Nook's Homes, in a variety of different styles and colors. New mailboxes cost 3,600 Bells. There are 21 different styles to choose from. Each style has a theme, such as Fairy Tale, Antique, or Trendy. When a player's mailbox is full, it will shake violently, beep very loudly, and the flap will snap open and shut. It will shake faster and faster the closer a player walks to it. Pete the mail pelican will also tell the other players about it when they exit their house, asking them to tell their friend to clear their full mailbox. After giving the player the message, Pete will wander around for a while and can still be spoken to. 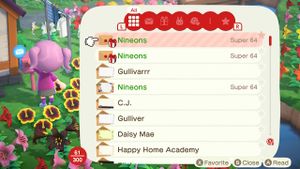 The player looking at their mailbox in New Horizons.

In Animal Crossing: New Horizons, letters are now exclusively stored in the player's mailbox, and up to 300 letters can be stored. Once the limit is reached, the oldest letters in the mailbox are deleted to make room for new ones. The letters in the mailbox can be filtered to unread letters, letters with gifts, letters from villagers, and letters from other players. Letters can also be favorited, which also prevents them from being automatically deleted.

Once the left room of the player's house has been built, the ability to change the mailbox design by speaking to Tom Nook is unlocked. The default design is the Rustic Mailbox, and there are a total of 33 designs. It costs 5,000 Bells to change the mailbox design, and it is changed the following day. Additionally, building the left room allows the player to pick up the mailbox and move it anywhere on the island, even if it is not close to their house.

In Animal Crossing: Pocket Camp, the player has a mailbox from which they can collect rewards from completing quests. 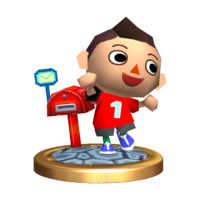 In Super Smash Bros. Brawl, one of the trophies available features a male player, and next to him is a mailbox which holds unread mail, shown by the blue sign on the mailbox.