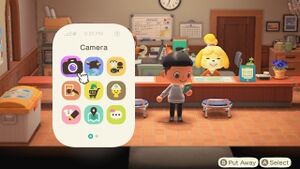 The player using their NookPhone

The NookPhone is a smartphone the player is gifted by Tom Nook at the beginning of Animal Crossing: New Horizons, part of the Deserted Island Getaway Package. In-game, Tom Nook explains to the player that he had the phones made for every individual on the island.

Opening the phone allows the player to access the various apps, which can be unlocked by completing certain tasks. Apps unlocked by default include the Camera, Critterpedia, Map, Passport, and ! Rescue Service apps. A unique feature of the phone is the ability to call a Rescue Service. If the player uses the service, it allows the player to reappear outside their chosen location. Using this specific app costs Nook Miles, while all other apps do not.

After completing Tom Nook's workshop on customization, Customizable Phone Case Kits can be purchased from the Nook Stop for

1,800 Nook Miles each. Customizable Phone Case Kits allow players to change the NookPhone's case to a custom design. Introduced in version 1.6.0 is the Pocket Camp Phone Case, which is a promotional item modeled after the player's phone in Animal Crossing: Pocket Camp that can be applied to the player's NookPhone. The Happy Home Paradise DLC introduces the Paradise Planning Case, which can be purchased from Wardell and applied to the player's NookPhone to match the other Paradise Planning employees' phones.