Various constellations in the night sky in City Folk. 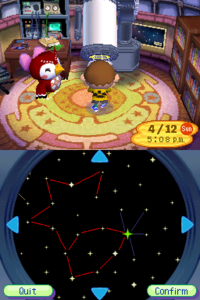 A player creating a constellation in Wild World.

Constellations may be edited and deleted. There is also a stargazing option, which allows the player to view the rotational night sky, but without having the ability to modify or create constellations.